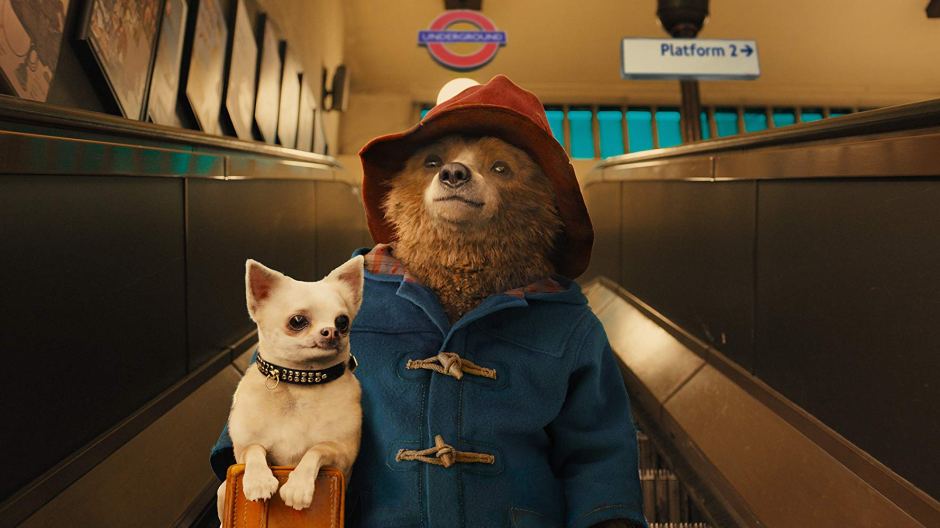 Ever since a friend described this film to me as like Notting Hill or Love Actually but for kids, I’ve not been able to shake that link from my mind. Because, yes, this film is very West London in that slightly twee picturesque way so beloved of Richard Curtis and his ilk, in that people live in brightly coloured, neatly-turned-down terraced houses on rather grand streets with gorgeous big, bright rooms that no one in London can possibly afford anymore. (I suppose, for American viewers, it’s the equivalent of your struggling working folk sharing a massive loft apartment in Greenwich Village, or wherever.) The story also, for rather more obvious reasons — in that it’s aimed at families, and that it’s a comedy, after all — embraces the sentimental and wholesome in the end, as teddy-bear-out-of-water Paddington looks for a stable home life with the Brown family (with Hugh Bonneville and Sally Hawkins as the parents). That said it does manage to shoehorn in a fair amount of furry-bear-related peril along the way, both in its opening sequences set in “darkest Peru” (as it is unswervingly referred to throughout the film) and in its later London-based caper sequences, as Paddington must fend off the advances of evil scientist/taxidermist (played with excellently gleeful maleficence by Nicole Kidman). It also makes some trenchant comments in favour of immigration, which in our modern political environment is certainly bold and should be welcomed. For all that, the initial comparison remains — and it would be damning except for the fact that, actually, I like Richard Curtis comedies (yes, even Love Actually), and once you’ve set aside the scrubbed-up locations, it’s rather sweet. It also has plenty of really rather funny comic asides (as well as stuff that will surely go over the kids’ heads); I’m still laughing about Mr Brown’s comment to the cabbie after the tourist-landmark-checking but geographically-ridiculous taxi journey that kicks off Paddington’s time in London. How it will play to children, I have no idea (there’s peril, and evil scientists, but never for too long), so don’t come to me for that. I am a fully-grown person, and I enjoyed this film.