Herewith some brief thoughts about films I saw in March which I didn’t review in full.

The Boys from County Clare (aka The Boys and Girl from County Clare) (2003, Ireland/UK/Germany, dir. John Irvin) [Sun 1 Mar at home]. A rather forgettable and silly little film about a group of musicians in Liverpool led by Colm Meaney’s gruff expat, convening on an Irish music competition in County Clare, where he works out some issues with his estranged brother (Bernard Hill, doing a rather patchy accent). It’s pleasant enough, in a passing-the-time sort of way.

Divergent (2014, USA, dir. Neil Burger) [Fri 27 Mar at home]. As the second one is out now in cinemas, I thought I’d catch up what I’d missed. There’s plenty to like here, especially Shailene Woodley in the title role of Tris, who doesn’t fit into her society. It’s based on a popular young adult dystopian novel cycle (one of several in recent memory), and I’d guess the vision of society is particularly appealing to teenagers who want to imagine themselves as standing out from the herds of their easily-categorised conformistly slavish peers. So it works on an emotional level, perhaps, but even a moment’s further thought about the practicalities of a society in which everyone is supposed to fit into a single personality type (Abnegation, Amity, Dauntless, et al) — except for (SURPRISE!) our heroine — reveals it to be particularly ridiculous. Still, it all moves along at a fair clip, and films about righteous revolutionaries challenging the basis of society are always fun to watch.

London: The Modern Babylon (2012, UK, dir. Julien Temple) [Sun 15 Mar at home]. This was always going to appeal to me, what with being quite a London-phile, so it’s hard for me to offer a perspective to those not quite so wrapped up in Britain’s capital city, but I really enjoyed this documentary assemblage of London throughout (visually-recorded) history. As one who has done particularly strong work documenting punk music in the 70s and 80s, Julien Temple naturally dwells at greater length on this era, but it’s fascinating to see the development of the city over time, using archival clips, film and TV footage, and contemporary interviews with witnesses to the past, including a vivacious Tony Benn.

Perceval le Gallois (1978, France/Italy/West Germany, dir. Éric Rohmer) [Wed 4 Mar at the BFI Southbank (NFT1)]. This is quite the oddest film from a director otherwise known for his small-scale, intimate and improvised relationship dramas. It’s an adaptation of a medieval story cycle by Chrétien de Troyes, dealing with King Arthur and his court, specifically on the journey of the titular character (here translated as “Perceval the Welsh”) through youth to adulthood, as he undertakes tasks that prove his worthiness as a knight. This would be straightforward enough as a standard big-budget epic, but it’s rather as if Rohmer had seen Robert Bresson’s Lancelot du Lac of a few years earlier and decided that that film, despite its cartoonish bloodletting and knights constantly clanking around in heavy armour, was just far too naturalistic. And so here there isn’t even the barest attempt to try and render the long-lost world of knights and chivalry with any realism, as it all takes place on a soundstage with colourfully-painted props and stylised two-dimensional trees, while dialogue is frequently delivered in the third person. There’s a chorus, too, of musicians and singers who stand to the side and narrate some of the action. However, after the initial shock, it all starts to exert a sort of fascinating hold and ends up working rather nicely. 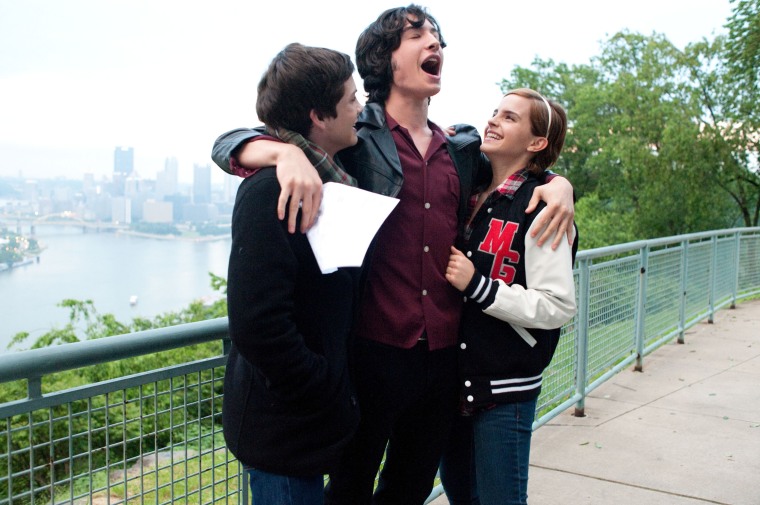 The Perks of Being a Wallflower (2012, USA, dir. Stephen Chbosky) [Sat 28 Mar at home]. There’s never been any shortage of high-school-set coming-of-age films, and in a sense this story (adapated from the director’s novel about his own upbringing) offers little that’s particularly surprising. However, there are nice performances from Logan Lerman as the shy central character Charlie, and Emma Watson and Ezra Miller as the flamboyantly self-dramatising pair he latches onto, who help him to come out from his shell.

The Prestige (2006, UK/USA, dir. Christopher Nolan) [Sat 7 Mar at home]. I’ve never been particularly enamoured of director Christopher Nolan, who like his contemporary Paul Thomas Anderson has always seemed to craft films which are almost too self-consciously full of their own importance. However, Nolan has tended to show more interest in generic trappings, and at the very least this story of a pair of rival 19th century stage magicians (played by Christian Bale and Hugh Jackman) is plenty of fun to watch. The film delves particularly into class differences between the two, while using its setting and theme to pull some narrative tricks on the viewer, in ways that are far more satisfying than more recent fare like Now You See Me.