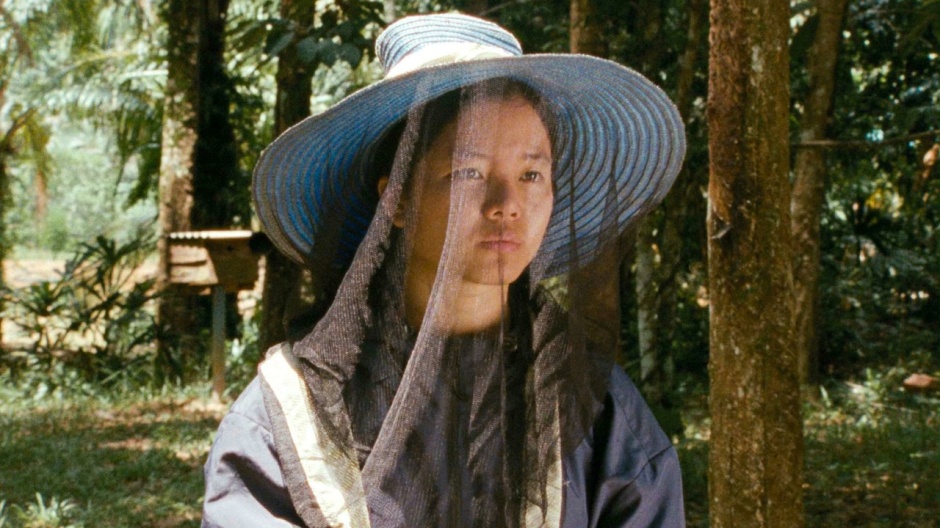 After yesterday’s solitary first film, I saw two films at the London Film Festival this evening, both of which highlight people’s lives in different places (the Côte d’Ivoire and Thailand respectively) but bring a sort of outsider’s perspective, albeit using quite different genre cues.

It’s a little tonally patchy, this film which is listed as Burkinabé but is set in Abidjan, in the south of neighbouring Côte d’Ivoire. It tells the story of Francis Desrances (Jimmy Jean-Louis), a Haitian of Ivorian ancestry who has been displaced by violence in his birth country during the period when Aristide returns to power — violence which claims the lives of his family — and 15 years later is back in his ancestral land (though not fully accepted by everyone), with a pregnant wife and young daughter; here he finds himself again amidst civil unrest and fearing for his and his family’s life. After setting this up, along with these periodic PTSD flashbacks he has to the death of his Haitian family, the film abruptly switches mode about halfway through into a tense and nail-biting thriller, in which the possibly deranged Francis runs around, trailed by his daughter, trying to find his missing wife and son. It’s clear something deeper is going on just from the way people are treading around him, and ultimately this feels like a thriller about the inadequacy of mental health care given to trauma survivors in Africa — or perhaps it highlights the sheer amount of such care that’s needed, given these bouts of violent conflict. The gang of criminals that loom large in this latter section seem lifted from a different film entirely, and it can be difficult at times to find the truth amongst all the frenetic pacing, but the film certainly has some beautiful passages all the same.

I’ve really admired Anocha Suwichakornpong’s feature films (Mundane History and By the Time It Gets Dark) while never quite getting into them (and I’ve never seen any by Ben Rivers), but I felt myself slipping into the mysterious rhythms of this one, even as I can’t place quite what happens. That’s partly by design of course: it’s structured as something of an evocation of the spirit of a place (which is the tourist town of the title, where it’s matched with the current Thai year), but with a throughline in which a couple of actors drift about, their scripted lives suggesting a further depth to the carefully poised and beautifully sound designed images. The man (Arak Amornsupasiri) is a singer and acts in commercials, while the woman (Siraphun Wattanajinda) is scouting locations for a film, and their presence loosely brings together a group of non-actors, who talk in what seem like unscripted inserts, and otherwise sort of guide us through the place (and the film). Different time periods and different eras are evoked, through images, sounds or indeed physical characters (like the Neanderthals who dwell in some caves), and it can be seen as a sort of hybrid documentary fiction, in a style that’s been so prevalent in recent cinema, but always here there is that lingering mystery that can never quite be resolved. The extent to which you allow yourself to fall into it is probably up to each individual viewer, but I was transfixed.