My eighth day of the festival should have been filled with more films, but I ended up not going to the third. Perhaps you could say the long hours were getting to me (I did feel my eyelids getting heavy briefly during Portrait), but actually something else came up. However, the two I did see both presented fascinating films about women’s lives, neither of which featured men at all (or almost never), though of course patriarchal control was never too far from the surface.

A lot of people really liked Céline Sciamma’s last film, which makes sense given her excellent track record (Water Lilies and Tomboy were both superb), and honestly I liked a lot of it and I liked that she was trying to engage with a different aspect of her own society (with race as well as class), I just didn’t think it achieved it quite as well as some did. Of her most recent film, it goes without saying that, as with Carol, I am not the person whose opinion you should be most respecting on this film because it is not about my experience. However, I do have an opinion and it’s that this is probably Sciamma’s best film so far, and it is brilliant. It is easily the most beautiful film I’ve seen so far at the London Film Festival — the cinematography of Claire Mathon is wondrous, with a gorgeous use of lighting, and some choice sunsets.

The film also has two engaging central performances, not least from the always excellent Adèle Haenel as the aristocratic Héloïse, being married off to an Italian she hasn’t met, and who, as is the custom, needs a portrait to send to him. Her mother hires Marianne (Noémie Merlant) to do the job that the previous artist, a man, was not able to do because of Héloïse’s unwillingness to pose. This introduces one of the film’s key themes, which is of the (specifically female) gaze, of the way that artist and subject look at one another, and where the power lies in the act of looking and of creating a portrait. The portrait that she’s creating isn’t the one of the title — which is introduced in, if you will, a framing sequence before the film flashes back — but the title is made literal in more than one sense, and that itself is rather delightful.

As an aside, the screening I was at — which took place in a temporary cinema constructed near Trafalgar Square, currently under occupation by climate protestors — meant that a constant background noise throughout this relatively quiet film was the sound of what I’m assuming were police surveillance helicopters, which suggested to my mind an additional subtext relevant to the film of invisible (but yet palpable) patriarchal control, and that is in the text too in the way that these two women are unable to fully realise their attraction to one another.

And then there’s the ending, and really the ending is where the film truly landed with me. Without revealing anything specific, it uses a very familiar piece of music in one extended long shot that is shot from one character’s point of view in such a way that the viewer is desperately willing for the gaze to be returned, despite clearly stating through voiceover at the start what will occur. It’s a masterful sequence, and a devastatingly emotional one that expresses so much about the power of the gaze but also the relationship at the heart of the film. 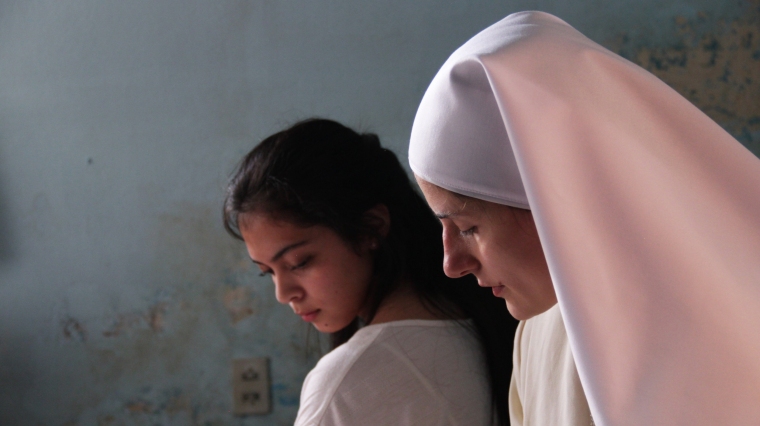 Though it’s never exactly explained in the film, a hogar appears to be an Argentinian institution for unwed teenage mothers who have been abandoned and are supported by the church through nun-managed homes. We are introduced to a group of gaudy, foul-mouthed and frequently feuding women — most prominently Luciana (Agustina Malale) — getting ready for a night out while their kids get in the way, with the difference that they live in one of these hogars and the nuns are not particularly impressed by their antics. Eventually it becomes clear the while Luciana hasn’t got much time for anyone but herself and her dreams of escape, her friend Fatima (Denise Carrizo) is a quieter more sombre presence who wants to be there more, while a young Italian nun newly arrived in Argentina, Sister Paola (Lidiya Liberman), starts to feel more affection towards Luciana’s abandoned four-year-old daughter — hence where the English title comes from. Director Maura Delpero stated in a post-film Q&A that she came from a documentary background, so getting the right actors (mostly non-professional in the case of the Argentinian cast) was crucial, even when this meant working with an actual four-year-old — no easy task. The film itself eschews big soap operatic emotions, though it could easily have gone down that route, in favour of a restrained style that favours quiet moments over histrionics. The performances, particularly from the actor portraying live wire Luciana, are all excellent, and it hints at a side of Argentine society perhaps a little less visible on screen.