There’s a gleeful absurdism at work here that’s hard to deny has some pleasure, though I found it overwrought, almost stretching too hard to be considered “cult” (familiar territory for director Bruce Robinson, this being his follow-up to Withnail and I). It’s a High Thatcher British culture media satire and Richard E. Grant is its high priest, an ad exec pushed over the edge by zit cream, forced to account for his work to a boil that grows from his neck and threatens to take over his identity and his life. There’s a do-you-see #SATIRE quality that I find strained, but maybe it’s the very soul of anarchic comedy genius. It certainly has its admirers, and Grant certainly isn’t sparing any actorly extreme in his dual-role performance.

Criterion Extras: Aside from the transfer and the liner notes, there are no extras here. 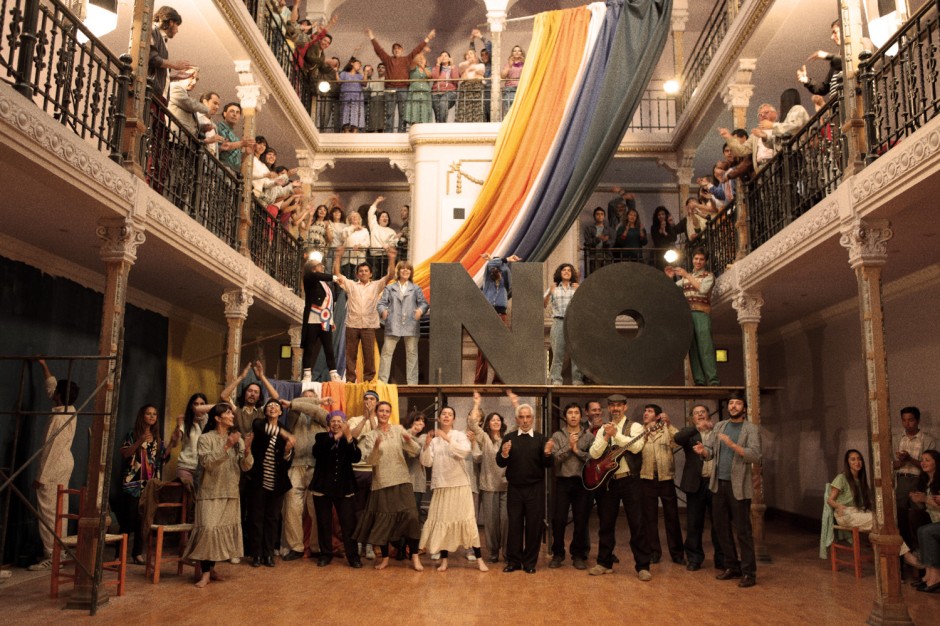 There are many types of filmmaking, and television advertising is one more. This is a film that finds common ground between filmmaking and political change, via the medium of television and the language of advertising.

As a story from his own country’s recent history, ostensibly this film by Chilean director Pablo Larraín is about the democratic overthrow of dictator General Augusto Pinochet in 1988, following 15 years of his rule, since he seized power from the left-wing Salvador Allende in a coup aided by the United States. However, it’s not really straight history, and it deftly manages to wrap in a commentary on the importance of television and the power of advertising, not to mention being a human drama about one man in the centre of this movement for change.

The protagonist of the drama is René, a creative at an advertising company, played by the ever-reliable Gael García Bernal. He’s no hero though, no crusading campaigner against dictatorship, bent on exposing the unjustness and brutality of the regime he’s working against. He’s just a man who knows how to sell stuff to people, and so the anti-Pinochet campaign is just another portfolio, albeit one that his conservative boss tries to dissuade him from pursuing. What he sees in it may ultimately be a hope for a better country, but at first it just seems to be a challenge to his training. Watching one of the ads that the politically conscious action group have created, he is aghast at how bitter and negative it is, and so he goes about fashioning something a little more ‘saleable’ — which, of course, resembles nothing so much as a Coke ad, a bit of lifestyle product placement with a voting agenda (vote “no” to Pinochet’s continued rule).

The film that Larraín has put together takes the historical situation as a backdrop. The film is primarily about the ironic disjunction between the political aims and the methods used. Towards the end, René returns to the usual fare, a ridiculous set-up with a helicopter full of plastic low-grade local celebrities, and nothing seems different. The film seems profoundly ambivalent at a certain level about what exactly has been achieved (not that it’s in any way supportive of Pinochet or his regime, for which little love is evident). It’s just that for advertisers and people in the media, it’s global capital that dictates their jobs and the way they work, not local politics.

Working alongside the script, the film’s style is a key to its success, as it mimics the film format of the era. Partly this is done so as to integrate the original television adverts seamlessly into the drama, but it also puts everything at just that slight remove, with the grainy fuzzy film making it seem like something quaintly out of time (in a similar way to, say, Andrew Bujalski’s recent Computer Chess).

It’s an interesting story of a country and an era that doesn’t get much airplay outside the region. It’s also a fascinating take on an advertisers’ dream of the 1980s, and about the way that advertising and politics don’t exactly make for easy bedfellows. Most of all, though, it’s a human drama about one man dealing with an industry (not to mention a country) founded on corruption, and where exactly that can lead.