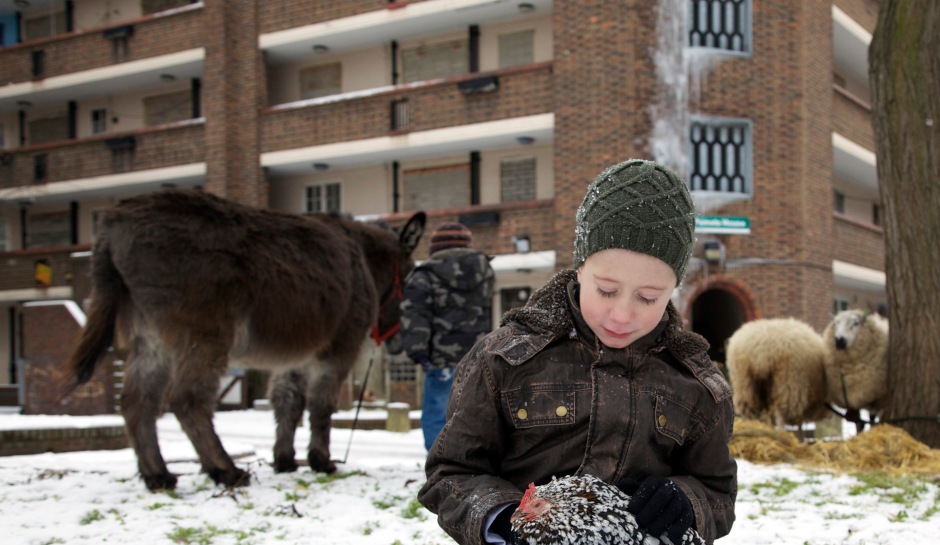 Most of the documentaries that gain an official release tell a story, usually about an interesting individual or group of people who have done something special or unusual (I feel like I’ve seen quite a few of these this year), but outside the mainstream of distribution there’s a space for a greater range of stories or styles. The gentrification of our inner cities, and the marginalisation of the poor and unwell within our society, are all topics which deserve angry, passionate, partisan and activist responses but Estate, a Reverie, as the title suggests, moves down a more self-consciously art-film route. In part this is because its particular subject, the Haggerston Estate in the London Borough of Hackney, is already part of the past: the last of its blocks was finally demolished in 2014.

However, the film is in its own way doing activist work, by instead documenting the lives of the people on the estate over the seven years in which it was filmed, and suggesting the value of the idea of social housing (however diluted and precarious that has become). Some of its subjects — who speak movingly of their childhoods during World War II, or their travels from far-off lands to end up in Hackney, or the illnesses they struggle with — never made it off the estate, a few we see evicted by a seemingly unfeeling council, while still others have been successfully rehoused. Yet the arguments of the film’s images and interviews — that nobody deserves to be excluded from society, that communities like that of the Haggerston Estate are vital for our health as a nation — remain as strong as ever.

It’s impossible to live in a city, especially a wealthy and increasingly gentrifying one like London, and be unaware of the urgent need for more strategies to deal with the lack of affordable housing: it’s one of the great issues of our lives, and one to which the government of the time thought they had an answer when the Haggerston Estate was built in the late-1930s. The documentary frames its interviews within this historical continuum. We see what looks like 1980s TV footage in which the Estate is framed as a social blight, we see Charles Booth’s late-19th century maps charting poverty and criminality in the area, and we learn that it was once the location of that other kind of estate, the moneyed one of the landed gentry, exemplified by the trajectories of the characters in Samuel Richardson’s morally-improving novels of the 18th century (after whom the Estate’s blocks were named). In this respect, the documentary stages little periodic irruptions of surrealism, like the brief images bookending the film of farmyard animals rooting about on the grounds, or when some residents dress up as Richardson’s characters and enact scenes from his novels.

Testimony from the residents is at the heart of the film, and each is introduced with a title that gives the number of years they’ve lived on the Estate, but we also spy some of the external forces that are shaping their fate. The vibrant orange boards that block up the empty flats are the most visible sign of this intervention from the local council, whose workers are only ever spied in passing, as when a flat’s doorway is being bricked up. But there are also the middle-class tours organised by the Open House London weekend every September, and one of these is shown at the Estate, engaging in what could be described as a form of poverty tourism. Certainly this seems to be how the documentary presents them (and one chap getting a photo of an elderly resident does a good enough job of indicting himself), though it’s without any underlying rancour or “hipster” namecalling — this is a reverie after all, not a call to arms. And I’m not entirely free of implication in this ‘ruin p0rn’, in evidence of which is my photo from 2009 of the Estate’s pub, boarded up prior to demolition, with the estate block in the background, orange boards clearly visible: 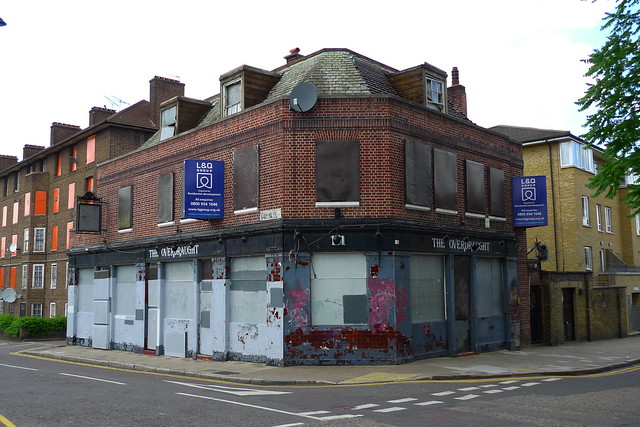 So perhaps my interest is that of someone who has passed by the Estate myself, and many others like it in London, and has seen the deleterious effect of chronic underinvestment. However, Estates, a Reverie shows with piercing clarity that the view from the inside is not the story we get from the media. It counters propaganda about sink estates and the social evils of poverty (‘benefits cheats’, ‘scrounging migrants’, all those hateful ideologies) with its own form of propaganda, something closer to the truth: that this is a vibrant community of people who are houseproud and care about where they live, who are engaged with society and try to help each other, and who struggle with neglect that every passing year gets ever more difficult to deal with. It’s not framed here with anger, and it doesn’t need to be. I can only hope the film gets seen more widely and made more available, because though I can’t be entirely sure (given it’s about my back yard), I feel like it’s a film about cities and capitalism, and not just about London.

NB: Just a pedantic note to close. The film’s website and production company give the date of the film as 2015, though as the poster included here shows, it had screenings at Dalston’s Rio Cinema in late-2014. I can only presume these were of an unfinished cut or weren’t open to the public, but I’ll go with the production company’s date. Also, the title is sometimes written with a colon, and is cited with no particular consistency on the official website, so I’ve gone with the comma, because I like it better.