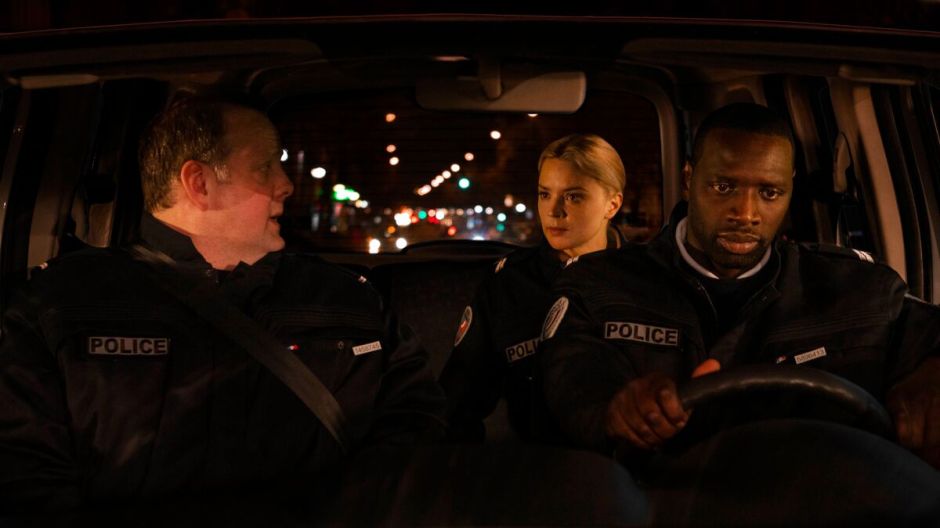 Like any town with more than a handful of cinemas (though barely more than a handful), there are a range of smaller film festivals being organised to show films that otherwise wouldn’t make it to a big screen, and such is the way in Wellington, where recently there was a French Film Festival. It showed a handful of classics (like Breathless) but most of the programme was dedicated to recent films, and I saw a few so that’s what I’ll be focusing on this week. I’ll start with the latest film de Anne Fontaine, the Luxembourger who’s not my favourite filmmaker but who does solid work.

This film is called Police in the original, but the title is shown reflected from right to left, and that very much cues you up to what to expect: it’s about the police, sure, but… are they the good guys? The title is a bold move, though, given there’s a Pialat film of the same name, and, look, I’ve been guilty in the past of seeing that Anne Fontaine directorial credit and being a bit dismissive, but I’ve never really hated any of her films I’ve seen (even Adore aka Perfect Mothers), and I appreciate her spin on fairly well-worn tropes, even if ultimately it all ends up feeling just a little… off somehow. Still, she’s assembled a fine cast of big names. Efira! Sy! Another couple of guys, who feel pretty honest to their characters, and she’s telling a story of morality intersecting with one’s work. It goes where it goes, and it doesn’t explain everything for the viewer; certain outcomes are hinted at, but there’s no expectation of change and I’m not sure Fontaine is even trying to redeem these guys, just give some perspective. I’m not suddenly, as a result, going to start loving cops as film subjects, but this feels like solid character work.

With some of the same actors as in Paweł Pawlikowski’s recent films Ida and Cold War is this Franco-Polish coproduction, with a more polished costume drama sheen from journeywoman Anne Fontaine, who has made some solid films (I’ve reviewed both Gemma Bovery and Adore on this site, and it’s fair to say I liked one more than the other).

Photographed by Caroline Champetier, there’s an austere beauty to this Poland-set World War II film about nuns in a convent dealing with the outcome of an earlier Russian occupation, with the help of a French Red Cross nurse, Mathilde (Lou de Laâge). It’s a terrifying prospect, even in wartime, and there are no easy answers with this kind of material. Perhaps, then, the truth and the intersection with faith overwhelmed the filmmakers, or perhaps they felt it better to set up the conflicts rather than guide the audience. I found it strangely distanced but I must concede this may be more a matter of my response.

You could make a case — and I wouldn’t be entirely unreceptive to your viewpoint — that this film is a regressive form of faux-naïf haute bourgeoise naffery. I’m pretty sure New Waves have formed in opposition to less provocation, and even if it isn’t quite the desultory cinéma de papa of the past (it has a female writer and director, for a start), it’s hardly challenging in the laidback literary allusions of the screenplay and its bucolic country town setting. There’s also a self-aware subtext revolving around the fitting of literary archetypes to (overtly constructed) characters that reminds me of another French film starring Fabrice Luchini, Dans la maison directed by François Ozon — though that film was more aggressive in pushing its meta-narrative, so if forced I’d generally prefer Anne Fontaine’s filmmaking to that of Ozon.

But already I feel I’m pushing back too strongly against a film which, broadly, I rather enjoyed. If it has that self-aware constructedness that may perhaps be traced to the involvement on the screenplay of former film critic (and Jacques Rivette collaborator) Pascal Bonitzer, it could also be said to critique a masculinist construction of feminine identity by having our central character Martin (Luchini) — and despite the film’s title, his is the point of view around which the film revolves — carefully watch and steer the narrative path of Gemma Arterton’s title character. Arterton is a fine actor who does great work with what is ultimately a purposely thin character, existing in that sort of Daisy Buchanan mould as an object of male lust and projected fantasies of femininity. That said, I wouldn’t go so far as to call it particularly challenging: Gemma is still largely a pawn to the (male-centred) narrative, and some of the comedy at the expense of Anglo-French relations can get a little strained (although there’s a very amusing smaller role for Elsa Zylberstein as a status-obsessed socialite). But as a testament to Arterton and Luchini’s excellent and subtle acting skills, Gemma Bovery does provide a pleasant divertissement.

UPDATE: Since the review below was written, this movie has been renamed Adore for the English-speaking market (or Adoration in some places). The title in France was Perfect Mothers. I’ve updated the review’s title to reflect this change.

As an Australian/French co-production (and entitled Perfect Mothers when I saw it in Paris), it’s tempting to credit the naturalistic acting style to the former, and the overwrought romantic storyline to the latter, but perhaps it’s unfair to suggest that Australian cinema shies away from dealing with rather twisted affairs of the heart. That certainly isn’t the case here.

The story, just to set it up briefly, deals with the eponymous mothers, Lil (played by Naomi Watts) and Roz (played by Robin Wright), whose entire lives appear to have been spent in each other’s company in the same sleepy seaside Australian town. In the space of the credits sequence, the film skips forward from their adolescence playing in the sea, to their own children (both boys) playing in the sea around the time of the funeral of Lil’s husband, to when their boys are fully grown, all on the same stretch of light-saturated beach. It’s all presented as fairly idyllic — sitting out by the sound of the sea sipping sauvignon blanc in the sunshine — and we never really get much of a sense of the rest of the town (except that there’s an office where Lil works, and a small theatre where Roz’s husband and son work). The point at which it all starts to unravel a bit, and where the (French) title gets its ironic sting, is when it becomes apparent that their respective children have developed romantic attachments towards the other’s mother, and that these feelings are reciprocated.

However one feels about the somewhat incestuous theme of the film, there is real delight to be had in the acting, which feels unforced and fresh. Wright’s Australian accent only occasionally falters, and both she and Watts do really well with the uncomfortable subject matter. It’s to the film’s (and the actors’) credit that it’s the relationship between the two mothers, rather than that with the (rather bland) sons, which anchors the story and feels like the primary interest of the film.

The location is well-chosen too, since it has to be convincing in its hold over the characters. END_OF_DOCUMENT_TOKEN_TO_BE_REPLACED