The first time I saw Steven Soderbergh’s magnum opus, his enormous two-part biopic/investigation of Argentine doctor Ernesto “Che” Guevara’s revolutionary life, I think I must have been a bit underwhelmed. In retrospect it’s probably significantly to the film’s benefit that it avoids the preachiness of most Hollywood biopics, and certainly avoids some of the moralising traps of other Soderbergh films. It’s hardly a revolutionary picture itself, though, and feels overly interested in pastiching period news footage in the scenes from NYC in 1964, with grainy black-and-white, off-centre close-up framings, nervous handheld camerawork and on-screen captions that mimic exactly the font of those old burned-in subtitles you used to see in footage. In other words, you wonder at times if it was more about the technical challenge than capturing the man, and certainly contemporaneous accounts invested a lot in the digital technology Soderbergh was using. But yet at its heart I feel as if this is quite an earnest project. Guevara isn’t the hero of the kind you see on the famous poster images, but just a man amongst many others (and women, too, as we see in the guerrilla armies he forms and leads) trying to make a positive change to a country mired in corruption, no thanks to US involvement. Soderbergh is hardly interested in digging deep into the politics, but just by focusing on Guevara, Castro and the others there’s a gentle sense of solidarity with those holding these revolutionary ideals and the dream of a future forged in training camps in the jungles and skirmishes on the streets.

Moving on a few years for the second half of this epic, it’s clearly possible to see how it works in tandem with the first part. That film presented revolutionary ideology and practice with the stylistic flash of, say, the contemporary New Wave cinemas of the era, as Guevara worked alongside his fellows in Cuba in the late-1950s, intercut with interviews and speeches at the UN in 1964. This part takes a quite different tack, going for more of a handheld observational style, using a muted colour palette that really downplays the lushness of the highland setting, as Guevara faces up to the reality of the struggle in Bolivia in 1967. If the first was a film about glory, this is a film mostly about disappointment and failure. Its episodic march of time, numbered by the days Guevara has spent in country, sees his people slowly picked off, their deaths really just captured in passing or off-screen, as the action follows increasingly bearded men messing around in the hills, trying to win over the local people and with a mounting sense of desperation. There’s nothing glorious here, but there’s a certain fascination to Che’s resolve, even as he’s battered by asthma and poor discipline from the forces he’s trying to lead. Perhaps by design, but it feels almost underwhelming after the first part, a corrective perhaps but a sad one.

I don’t know that I can say that this new film from Wes Anderson in any way grapples with the contemporary position of journalism, but I’m not sure that many would expect it to. In a year in which the Nobel Peace Prize went to a pair of journalists doing work in the most difficult circumstances, this film instead looks back fondly to a time (well, various times during the mid-20th century it seems) of what can best be described as gentleman journalism. There are outsiders, criminals and revolutionaries, but no real sense of peril or expectation of change. I can easily imagine a way to damn the film for this, but I chose in this case to go with it, making this a pleasant divertissement.

Everyone now must have a pretty good idea about whether they’re a Wes Anderson person or not. If you find his style in any way irritating, or his subjects just a little bit too affectedly pretentious, then you’ll probably run screaming from this. I thought I was done with him — as with the Marvel Cinematic Universe (albeit for different reasons) — but I ventured along and… it was quite likeable. Of course it has all his hallmarks. Right from the start you can see that it’s a love letter to The New Yorker as well as to Europe. I’d say to France, but I do wonder how the French would take it, as it’s just so doggedly adherent to so many stereotypes of French people that I imagine it would seem vaguely absurd and perhaps offensive. You can also tell it was written by a bunch of guys the moment Léa Seydoux arrives on screen. But for the most part this portmanteau film, essentially a number of shorter films tied together with a loose framing structure, is quite delightful. I especially loved Chalamet and Lyna Khoudri as student revolutionaries, with plenty of cribbing from 60s Godard movies (Khoudri being styled to look like Anna Karina) with plenty of other visual references throughout, but there was a sort of emotional core at the heart of that particular story which seems a bit hit or miss elsewhere. It blends black-and-white and saturated colour pretty liberally, and it never bored me. I wonder at the end what deeper meaning I’m supposed to take other than, ah yes a golden age of journalism and engagement with the life of the mind. But maybe that’s enough. 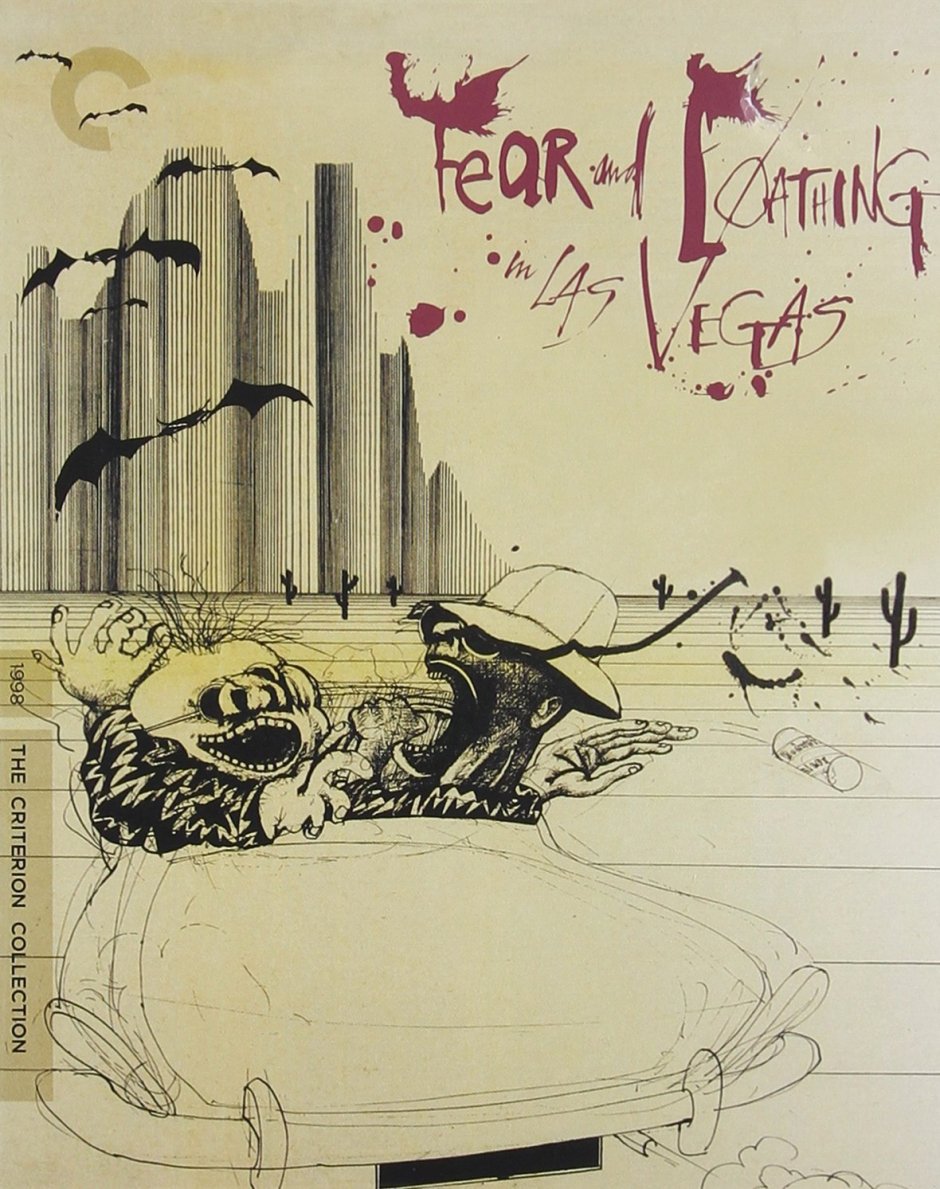 I can’t really imagine anyone else adapting this work, and what Gilliam does feels about as faithful as one is likely to get to the tone of Thompson’s novel: it’s a constant barrage of surreal, warped visions of drug-addled psychedelia shading over endlessly into the bleak darkness of the American Vietnam War-era psyche. And yet it’s so exhausting to watch, so unrelentingly ‘gonzo’ in its approach. Surely this is the genesis for the rest of Depp’s later career, as his director makes no effort to rein in Depp’s absurdist tics whatsoever (he probably demanded more), and so his Thompson/Raoul Duke is bouncing off the walls — apt for the character no doubt, but as I say, tiring to watch. Which probably makes this film adaptation some sort of masterpiece, maybe even Gilliam’s best work (he’s certainly not done anything since that, to me, matches it), but it’s also a weary, weary descent into a very specifically American madness.

Well, first up, I can’t really deny Soderbergh is a skillful director. He has a way with cinematic narrative that puts him up there with that other sibilant Steven of Hollywood preeminence. Despite a two-and-a-half-hour running time, Traffic (like the British television mini-series it’s based on) is never boring; it’s well-paced, tightly structured and it has plenty of fine performances (not least from Soderbergh regulars like Don Cheadle and Luis Guzman as a pair of cops investigating a mid-level drug dealer, Miguel Ferrer — also excellent). It’s just, at a fundamental level, I’m not sure at some of the hand-wringing arguments being made here about drugs, not least the racialised aspect of it. I mean quite aside from the Mexicans (they’re all corrupt, all of them), there’s the weirdly morally judgmental descent of Michael Douglas’s daughter (played by Erika Christensen) — he’s a high-flying government drugs czar, she’s privately-educated (and hangs out with Topher Grace of all people), her nadir apparently being sleeping with a black drug dealer. I mean maybe I’m reading too much into it, though I found the attitude towards the teenagers generally a little condescending. Also, Soderbergh was deep into his own addiction to coloured lens filters (Cincinatti is BLUE, Mexico is YELLOW, and at least DC and LA are sort of normal), which gets trying too. Anyway, it’s enjoyable enough, but I wouldn’t call it his masterpiece. 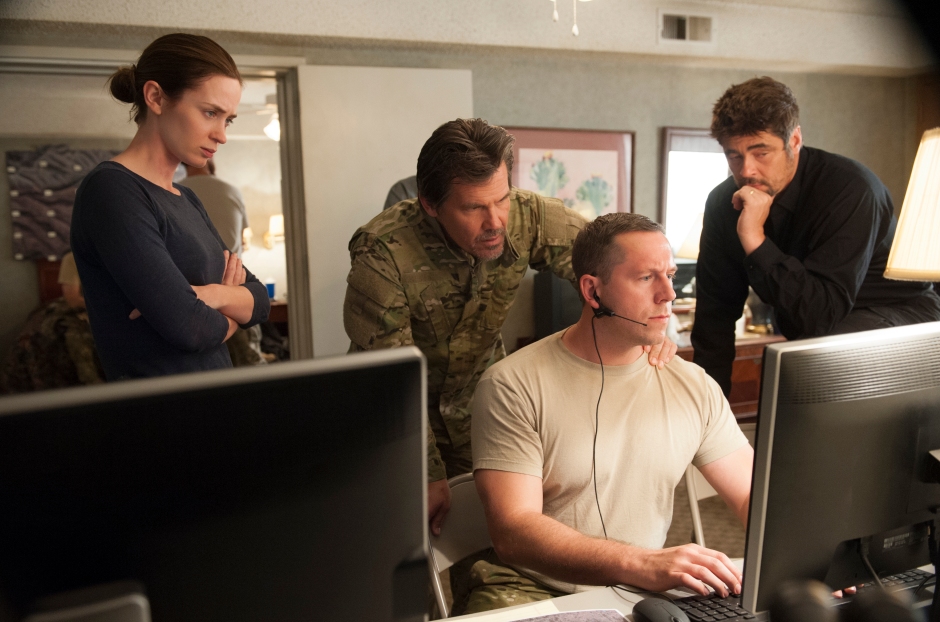 I’m not a ‘real’ film critic, I just bash away reviews here on the internet for my own amusement, and that of a small handful of readers, who I imagine are only intermittently engaged even then. So when I don’t like a film as much as I feel I’m supposed to by the ‘real’ film critics, I tend to get self-deprecating and assume there’s something wrong with me. You, for example, may love the taut, tense atmosphere established in the brooding first hour of Sicario, beginning with its portentous explanation of the title (something about the Hebrew scriptures, I’ve kinda forgotten, but the film poster says it means “hitman” in Spanish). You may find the apparent moral complexities of the scenario set on the US-Mexican border deeply involving, in which those running the operations (Josh Brolin’s Matt, in league with Benicio del Toro’s Alejandro) have a shadowy identity unknown even to our nominal hero, the quiet and studious FBI agent Kate (Emily Blunt). I don’t want to put you off going to see the film, and it does have its strengths, hence my tentatively positive review. I’m on the level about the atmosphere, for example — it really is very well set up by Canadian director Denis Villeneuve (whose mindfuck Enemy was most recently on UK screens), with a laconic script and plenty of long-shots suggesting at times that we’re watching surveillance footage. We see Kate in action with her FBI team at the outset, uncovering a home filled with dead drug mules (somewhat in the grisly style of Se7en) and rigged with explosive devices, and from there, scarcely rattled, she is swiftly co-opted into Matt’s team via a series of unseen (to her) high-level meetings.

It’s just that, for all the efficacy of its portentous tone, none of the insights seem particularly believable, though the key to that I suspect is that audiences want to believe that the US government operates shadowy black-ops teams who — and here be spoilers, albeit without any names, as these are explanations the film doesn’t indulge until about halfway through — co-opt Colombian drug cartel hitmen to help take control of the Mexican drug trade so as to better… I don’t know, assassinate all the bad guys? In that sense, it all feels a bit 80s. By the time the film gets to its denouement, its titular hitman is as potent a symbol of pure imperialist ideology as anyone out of a Tarantino flick; he might as well be wearing shades and quoting scripture. Certainly the moral complexities seem to evaporate in a haze of Mexican dust and dead bodies, as certain members of the audience emit nervous (or perhaps triumphant, depending on where you’re watching) laughter at key scenes of torture and bloodshed. Meanwhile our apparent hero Kate, despite being an FBI agent, entirely lacks agency within the film, and the times she does attempt to step up, she’s quickly rebutted by violence and intimidation. In this way, it certainly reveals patterns of male violence and controlling behaviour as well as some rather confrontational attitudes towards immigration, but then so did Touch of Evil, a film with which Sicario certainly shares a setting and a few moral grey areas, with Kate and her legal-trained FBI buddy the audience’s stand-in for Charlton Heston. Still, if you’re going to stand up to such a towering work of cinema then Sicario does pretty well all told. Just be prepared for a lot of guys, guns and nasty business.