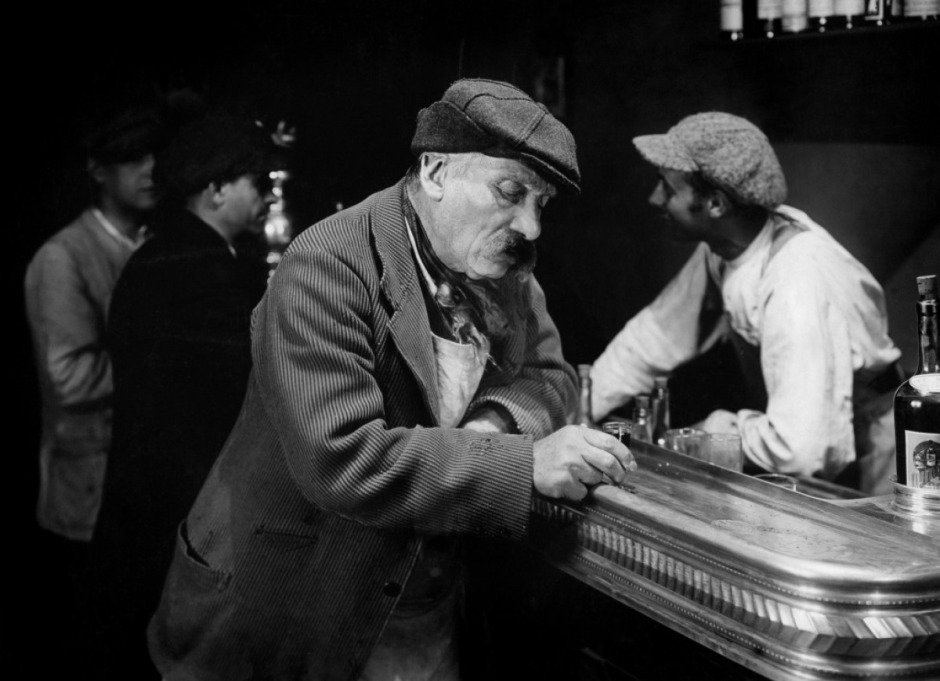 As part of the regular monthly ‘Kennington Bioscope’ night, this feature was presented along with a number of short films, with an intermission between them. Piano accompaniment was provided by organisers Lillian Henley and Cyrus Gabrysch for the shorts, and by renowned silent film accompanist and concert pianist Costas Fotopoulos for the feature.

The more silent films one watches, the more one realises there’s a huge range of expression beyond the kind of hyperactive slapstick we’ve at length come to associate with the era (though some of the shorts, see below, fulfil this function more than adequately). Instead with this film, we see Belgian director Jacques Feyder expressively try his hand at a kind of proletarian social realism, with moustachioed Maurice de Fléraudy playing an honest working class protagonist ground down by the unfeeling, pettifogging machinations of the authorities. In this respect, it’s not unlike, say, Bresson’s L’Argent (1983), in which a chain of minor events build into tragedy, but the film I’m most minded of is Fassbinder’s Händler der vier Jahreszeiten (The Merchant of Four Seasons, 1971), which also centres on a street peddler pushing around a cart of groceries.

For me, there’s something similar here to the way Fassbinder lays on the incidents and watches his character suffer under their weight. Feyder’s touch is lighter, though, and while things seem bleak at times, it never feels masochistic. The character of Jérôme Crainquebille (or “Bill” in the name given him by the original English-language release of the film) has a largely fatalistic approach to the way he’s treated, first arrested on a false accusation of abusing a bored cop, before being processed through the justice system and eventually released, shunned by his former customers. The scenes in the court, indeed, have an almost farcical quality to them, as we see defence, prosecution and judge respectively amuse themselves, showing little interest in what’s going on before them, and the statue of justice at the front of the courtroom turns and looks accusingly at the poor wretches in the dock.

What elevates the film is the almost naturalistic acting by Féraudy and the other minor characters (shopkeepers, cops, prostitutes and newsboys) who populate this world of street vendors based around the Les Halles market, itself long gone. The set design emphasises the dirt and shabbiness of these lives, punctuated a brief fantasy interlude in which Crainquebille imagines a life in the country, growing his own vegetables rather than selling them from his cart. And while tragedy at times seems inescapable, the film remains affectionate towards its impoverished characters, and allows for a little bit of hope to shine through the gloomy black-and-white.