I had this idea that I watched this film with my stepbrothers when I was a kid, but if I did I certainly didn’t get it at the time (nor do I remember any of it upon rewatching so I may just be imagining it). However, as a result, I’ve probably spent more of my life than is reasonable believing I wasn’t really ‘into’ David Cronenberg’s brand of body horror combined with media satire. That said, I’ve seen plenty of his films since, and I’ve liked most of them quite a lot, but yet still retained some core of that original belief, perhaps modified somewhat into some idea that he’s just an outré auteur who panders to horror-soaked fanboys’ wet dreams… and clearly — look, you all know this already — but I’m wrong.

Videodrome looks from the outside as something nasty and exploitative, but it feels more like an advance warning from a Nostradamus of the early-1980s about everything we have in our culture now. The technology may look a little clunky but the effects still hold up really well. It’s the kind of film that you probably need to rewatch a number of times to figure out its particular configuration of the televisual exploitation of sleaze, sex, sexual violence and depravity, the way that links to notions of masculine performance (James Woods, who nowadays probably really is that guy he’s playing here, hallucinates a literal vagina opening across much of his torso), added to which there’s the fetishisation of videotapes. There are also so many layers of hallucinatory dream life that it stops being clear what’s real and what’s just in the head of Max/Nicki/Prof O’Blivion/Cronenberg/whoever else might be imagining this stuff.

In short, it opened up my head like Barry Convex’s in this film, and I don’t know if I can be the same again. The 1980s was the decade of Cronenberg, no doubt.

I worry that this is a film for those who like to vaunt the magisterial status of author William S. Burroughs, or who laud the cinematically outré and self-consciously cultish qualities of David Cronenberg as director — and I assume many of the same people will rep for Fear and Loathing in Las Vegas (Gilliam and/or Thompson) in many of the same ways, or perhaps something out of the filmography of David Lynch. For this is a film about being a writer as well as a habitual user of narcotics, and is made with an attendant kind of insane dream logic that leads to hallucinatory bugs-as-typewriters who speak through anus-like holes and set up complex plots in alternate worlds (the Interzone) that touch as much on Burroughs’ own life (his well-known murder of his spouse for one) as on any kind of verifiable reality. Peter Weller is a capable straight man for this carnivalesque creepshow, which has some of the qualities of Paul Verhoeven’s Total Recall (maybe I’m thinking of the prosthetics) and a typically Gilliam-esque crowded mise en scène, while of course the spirit of Kafka seems to hover over it all… and if any of these swaggering artistic men do not thrill you, then perhaps this is not the project for you. 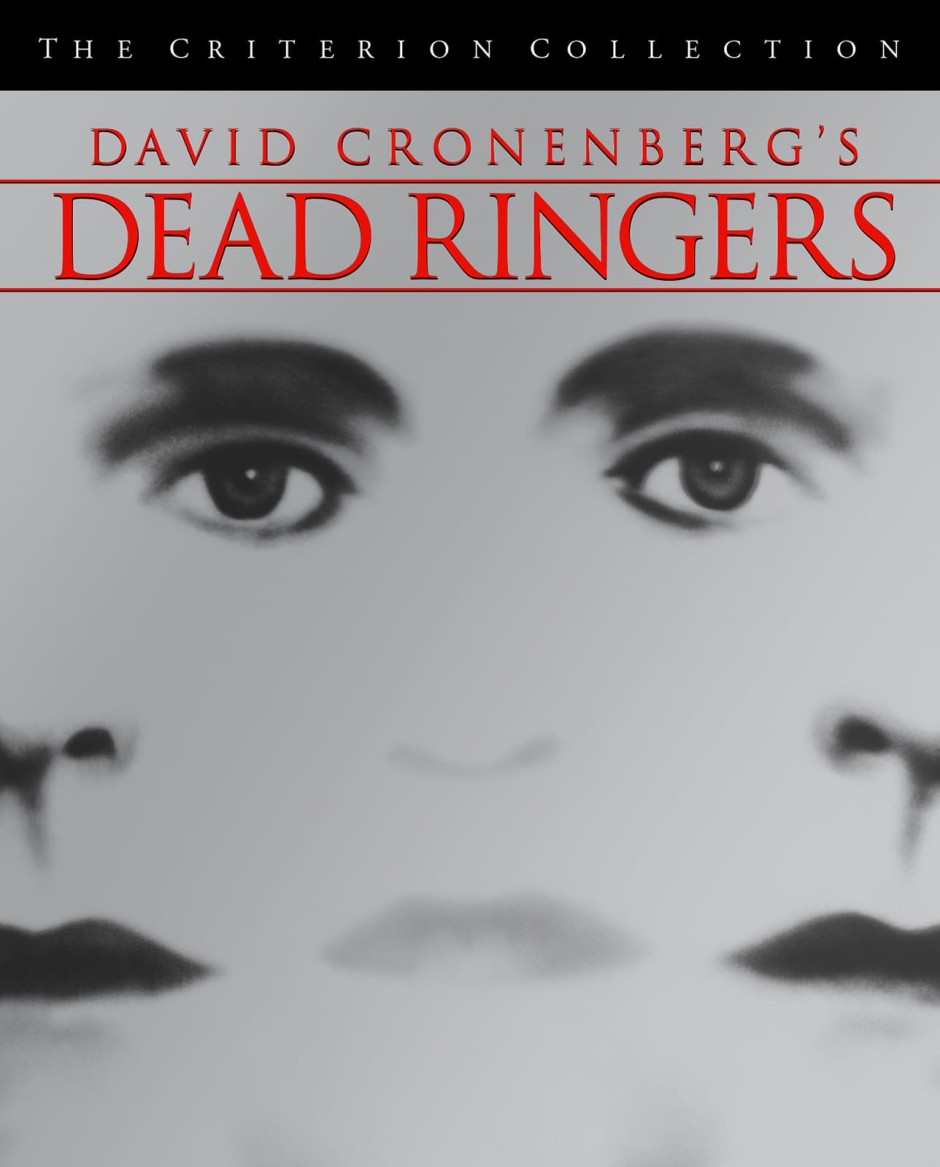 David Cronenberg’s films can be difficult to classify, and this certainly applies to Dead Ringers, involving as it does elements of horror and psychological thriller, as well as being a character study of a pair of twin gynaecologists, the Mantle brothers. In this role, Jeremy Irons is superb, managing to convey a distinct personality for each, meaning it’s (almost) never unclear which one is which, despite their largely similar look. The set design maintains a sort of creepy anonymity, as the film takes place in a series of almost indistinguishable blue and beige rooms, with the only really bold colour being the crimson red capes that the brothers wear in the operating theatre, recalling the garb of a 15th century cardinal (or perhaps even a plague doctor). The film manages a masterfully controlled slow build of tension and creepiness, as a famous actor (played by Geneviève Bujold) is pulled into their increasingly fraught orbit. There’s some dense ideas about individuality in there, but they never get in the way of the story. A film worth revisiting. 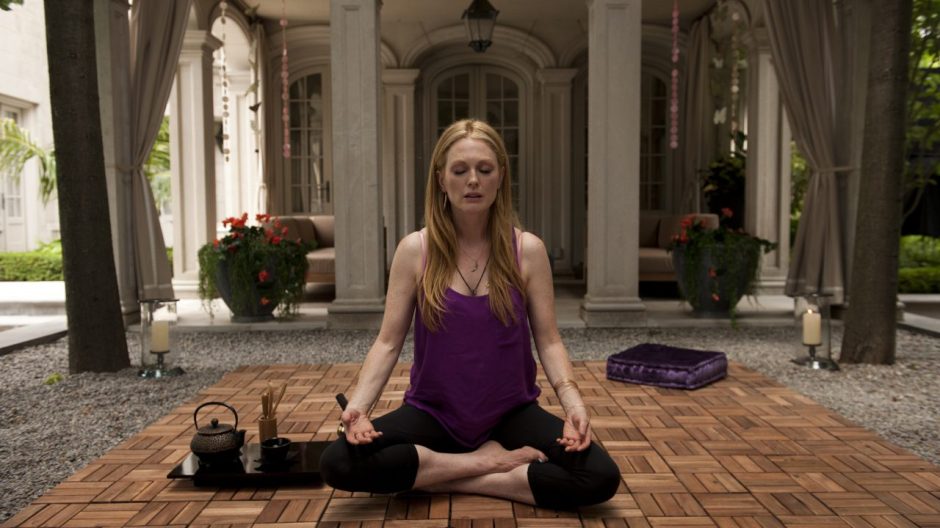 Whenever I visit Paris, I seem to get the opportunity to see an English-language film somewhat ahead of its release elsewhere in the world, and my experience has been that these films have probably been a bit too weird to find mainstream success. Such was the case with Anne Fontaine’s Adore (aka Perfect Mothers, 2013), and it’s certainly the case with this, the latest David Cronenberg film. It’s not the setting and the atmosphere that are unusual — this vision of family dysfunction amongst the hermetically sealed-off homes and egos of Hollywood is familiar from films like Robert Altman’s The Player (1992) and, more recently, Sofia Coppola’s The Bling Ring (2013). Nor is it strange for the way it seems to share a spiritual kinship with that other twisted North American David’s Mulholland Dr. (2001) at the level of its unsettling atmospherics. What’s most disconcerting about the film (admittedly partly the reason it brings Lynch to mind) is in the melodramatic dynamics that are in play amongst the film’s protagonists — ageing diva Havana Segrand (Julianne Moore), infomercial guru Stafford Weiss (John Cusack), his neurotic wife Cristina (Olivia Williams) and their brattish movie actor spawn Benjie (newcomer Evan Bird), and mysterious stranger Agatha (Mia Wasikowska) with her enigmatic burn scar and initial apparent fascination with Hollywood homes. It’s all beautifully and antiseptically shot, and it’s one of those films that impresses with the density of its ideas upon later reflection, but the experience of watching it is odd and unsettling enough that I remain unconvinced. There’s a recurring incest metaphor that expresses itself in the arc of several characters, primarily the bond between Havana and her mother Clarice, who died many decades earlier, while still in the bloom of youth. We see some (rather unconvincing black-and-white) footage of one of Clarice’s films, and she appears as a waking nightmare to Havana at several points, as do other dead presences to other characters. But this is only one way in which the past haunts the present characters. The strangest is the repetition throughout the film of a poem by French symbolist Paul Éluard. It’s spoken in the old film of Clarice’s, it’s recited as a mantra, it’s even being memorised by Benjie in his trailer. The poem, “Liberté”, was written in 1942 as a riposte to the Nazi control of France, which already loads it with a history to which the film doesn’t always seem equal. But this is, after all, a film in which characters are trying (not always with great success) to free themselves from the burden of the past. If it sets itself out to be a map of the interrelationships between these Hollywood players, then it’s clearly one that people should be wary of following.