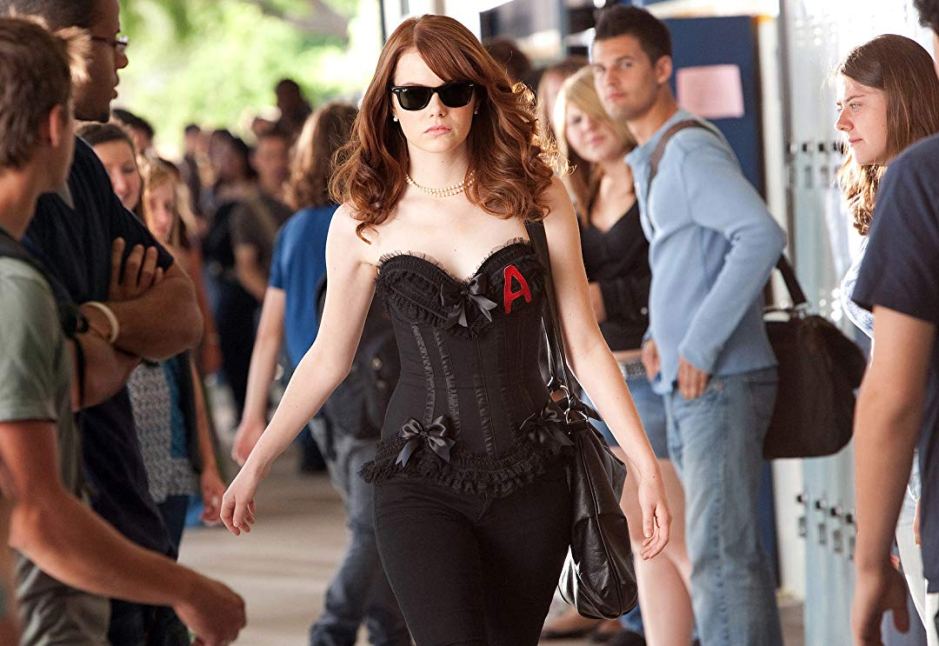 Easy A is a late entry into that cycle of ‘classic texts given a high school teen film twist’ — the genre largely inaugurated by Clueless 15 years earlier and continued most effectively by 10 Things I Hate About You (1999) — but a surprisingly deft one.

I would, however, put its success largely down to Emma Stone who is wonderfully engaging and funny in the role of Olive, whose character must endure the gossip and slurs of others at school for her easily but inaccurately-acquired reputation for being ‘easy’. In this respect, the lineage it most evokes is Mean Girls (2004), though it lacks that film’s, well, mean streak. That’s not to say that Easy A entirely avoids any slightly lazy stereotyping. For example, having your lead villain (Amanda Bynes) be a bitchy and hypocritical Christian conservative student is hardly a stretch, though it makes her nastiness easy to ignore. It’s also interesting in that I read recently that young Americans who practise religion are often more liberal than their parents’ generation, with so many of those touchstone issues having little traction amongst the young. This all goes to making this film’s ‘social problem’ seem that much more anachronistic: it’s surely not believable that in 2010, a young woman would be the object of so much speculation for this kind of transgression (sleeping around). If it’s a ploy to tap into and comment on current forms of social networking, then the film is doubly out of step, preferring to focus on (strangely high-definition) webcam confessionals.

And yet despite feeling like a throwback to another era, I still find the film by and large charming. After all, this is a constructed movie world, where everyone looks glamorous and your teachers are played by Lisa Kudrow (who seems to be minoring in this kind of film, after her appearance in the woeful Bandslam, and whose guidance counsellor character is sadly no Ms. Perky) and Thomas Haden Church (delightful). Better even than the teachers are Olive’s parents; Olive earlier berates her best friend’s folks for being ‘hippie’, but Stanley Tucci and Patricia Clarkson’s characters are the proper hippies — free-spirited and supportive — and steal the film whenever they’re on screen. The rest of the cast is largely forgettable, especially the male leads, but that’s fine: this is a film primarily about women relating to one another and the boys at school — in the film as in the film’s plot — are expendable.

If it’s a minor film in the scheme of things, it’s at least a sweet one. It won’t corrupt anyone (whatever its classification, though a 15 rating seems strangely high), nor will it provoke one to worry about the youth of today. I’m really more worried about the screenwriters.