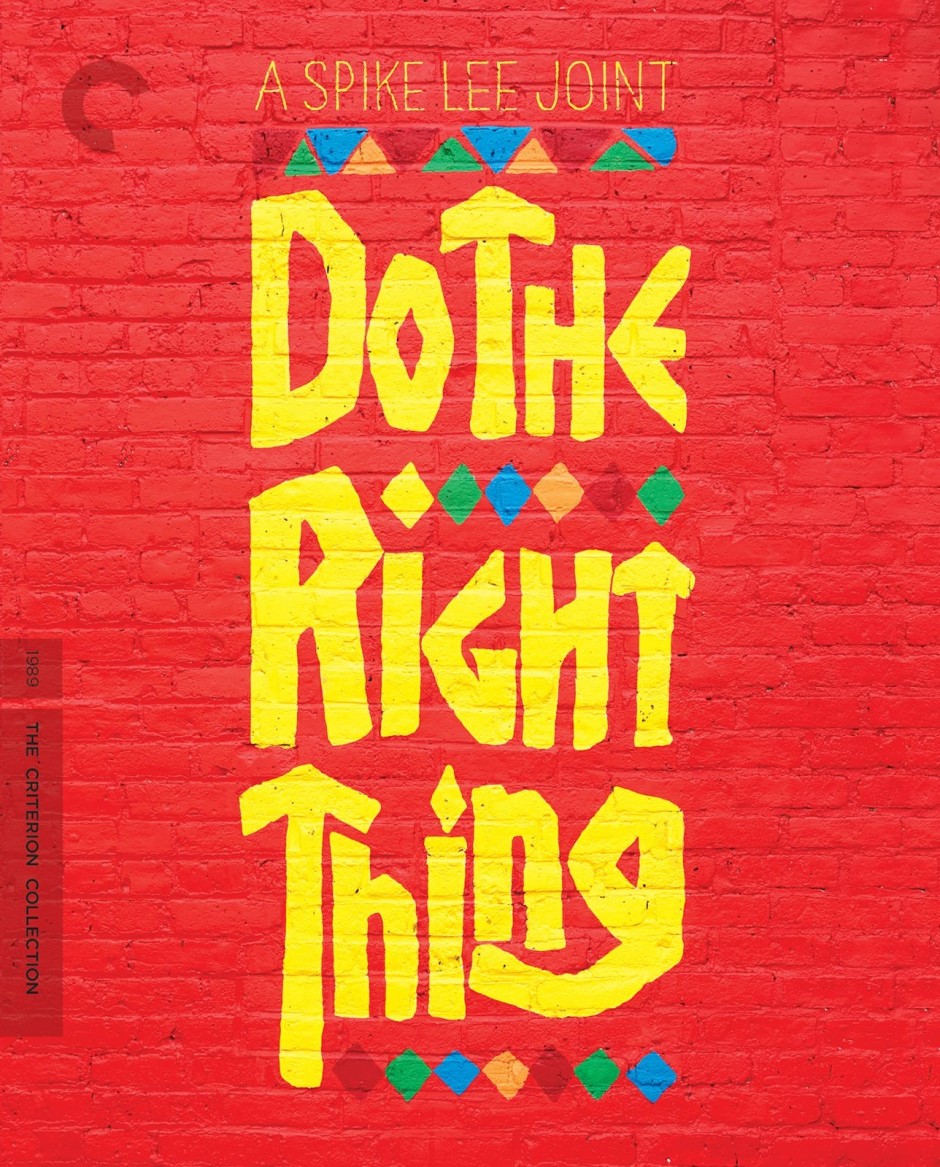 It’s been over 25 years since this film was first released — the film that very much put Spike Lee on the map, even if he’d had a few features before this which had garnered attention. It still fizzes with energy, a bold primary-coloured work of cinematic joie de vivre that, thanks to its sterling cinematography from Lee’s collaborator Ernest Dickerson, has a warm filter placed over everything. Every surface seems to drip with sweat and refract with the heat of this, the hottest day of the year. It’s shot and set in the Bedford-Stuyvesant area of Brooklyn NYC, and presents a warm-hearted portrait of a community that certainly isn’t perfect but is trying to get along. There’s a foothold to an older generation of Italian-American immigrants (the traditional white working class of Sal and his sons, running a popular corner pizzeria), whose ancestors may have made up much of the original population but who by the late-20th century have also largely fled to other areas further out in Queens and on Long Island (so-called ‘white flight’). There are the Black Americans who’ve also been there for some decades, and who are the beating heart of the modern community. There are Puerto Ricans in the mix, there is a newer influx of Asian immigrants (the Koreans who own the corner grocery opposite Sal’s, somewhat stereotyped), and there are even signs of a monied white middle-class moving in to start gentrifying the block. And everything would largely be fine except for the blasted heat which seems to fry everyone’s brains, leading to the film’s denouement. The one thing the heat can’t fully be blamed for — and the one area where Lee’s generosity to his characters is notably absent — is the action of the New York city police.

If the film still feels contemporary, still feels like a relevant angry broadside, it’s not just because fashions come back around, or that the urgent music of Public Enemy never really dropped out of style, or because of the stridency and subtlety of much of the acting. There’s Danny Aiello as Sal who tries to get along but is still marked by his racist upbringing, Richard Edson and John Turturro as Sal’s divided sons, Spike Lee in the central role of the rootless Mookie who can’t really manage his adult responsibilities, Rosie Perez as his angry girlfriend, angry as much from Mookie’s inaction as from the stress of raising their son, and the range of Greek Chorus figures like Ossie Davis and Ruby Dee as the elderly witnesses to their neighbourhood, the unemployed men sitting out on the sidewalk commenting on the action which passes them by, and Samuel L. Jackson as Mr Señor Love Daddy, the radio DJ. These are all very strong performances, and keep the film seeming fresh. But mostly it’s still contemporary because the interactions between American police and the neighbourhoods they are supposed to be policing doesn’t appear to have moved on, even as a generation has since passed by. Do the Right Thing testifies to the illegal deaths of Black men in police custody (not to mention a passing graffito reference, “TAWANA TOLD THE TRUTH”, to a notorious rape denial case of the era), and the sad thing is that news headlines of 25+ years later have scarcely moved on. The film makes the useful point, one that never really becomes tired, that racism and injustice affects everyone in a community. Hence: do the right thing.

Criterion Extras: It’s a packed edition, one of the early tentpoles for the growing collection. Most notably is the hour-long documentary Making “Do the Right Thing” (1989, dir. St. Clair Bourne), which is more than just a puff piece making-of that you’d get on a mainstream release. This is very much a cinematic work, one that tracks the progress of the shoot from its very earliest beginnings, but also talks to and gauges the response of the locals who’ve been affected for almost six months by this production, as Lee’s team builds sets along a block, and then for eight weeks is out there filming, shutting down the street and calling for silence for chunks of the summer. Suffice to say, not everyone is happy, and the film hears their voices, but is also watches carefully as the actors grapple with their characters (Danny Aiello in particular has trouble grasping the essential racism of Sal). It’s a very fine bonus feature indeed.

Alongside this, there is also a significant amount of (somewhat shakily amateur handheld) videos documenting the rehearsal and filming process with Spike Lee and his actors. The 1989 Cannes press conferences is reproduced in full, replete with slightly confused questions from the white European journalists present, and a short piece in which Lee and his producer revisit their locations 12 or so years on. There’s Lee’s video for Public Enemy’s “Fight the Power”, which contextualises their words within a tradition of protest as seen on archival film footage. And there’s an interview with Lee’s editor Barry Brown talking about the challenges of the work. Each of these extras is prefaced by a short Spike Lee introduction, and he also wraps up with some final words.

For all my filmgoing, I’d never seen a film by feted Italian director Nanni Moretti, though this seems like a good one to start with. As far as I can tell, his style is to make personal, often autobiographical films, and Mia madre (“my mother”) is little different, except that the director stand-in is played by Margherita Buy rather than Moretti himself. She’s making a film that reflects a certain crisis in capitalism, as workers protest lay offs by an unfeeling corporate boss (it’s not dissimilar to Godard and Gorin’s Tout va bien in some ways). However, it’s a difficult shoot, not helped by the American actor playing the boss (John Turturro) having a terrible time remembering his lines, and having only a patchy grasp of Italian. But more troubling even than this is that Margherita’s mother is dying. Moretti is still in there as an actor, as Margherita’s brother Giovanni, but the focus remains on Margherita, and Buy does excellent work in finding the right tone, a sort of detached malaise emphasised by the camerawork and aspects of the style that seem to isolate her even amongst other people. For all that’s going wrong, though, it’s not a depressing film exactly. Turturro as the inept actor Barry, who is fond of retailing a fictitious anecdote about working with Kubrick, is a comic highlight, and his energetic mugging contrasts with the scenes of the mother ailing in a hospital.

At their worst, the Coen Brothers can come across as dilettantish, with an air of superiority to their characters (who often seem little more than caricatures), and it would surely be possible to argue that they’ve shown this hand in O Brother. They’ve certainly marshalled a whole host of period references to the 1930s into a comic book confection to little lasting effect. And yet I have a warmth of feeling towards this film that derives primarily from the music, not to mention the gorgeous widescreen Cinemascope photography and the easy affability of George Clooney as a lead actor. I don’t think any of this makes the film less shallow, but it does make me more fondly disposed towards it.