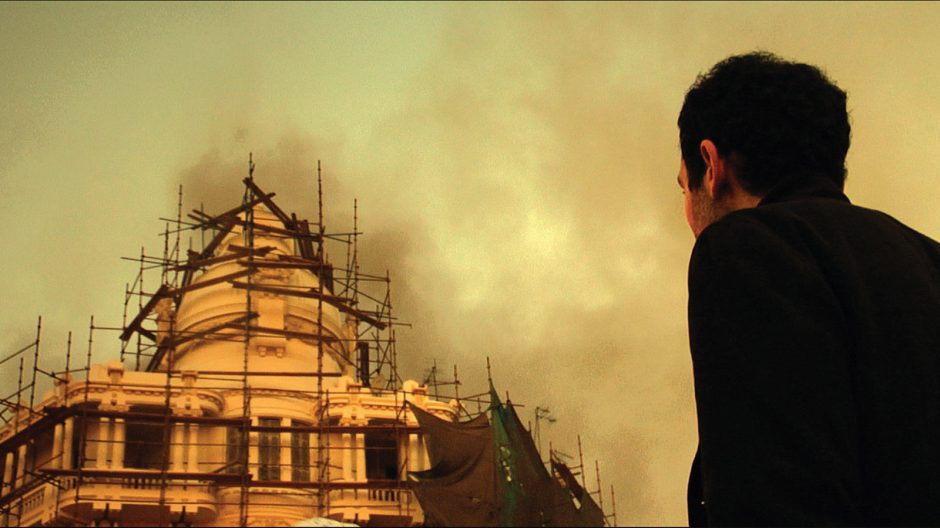 As one of the world’s great cities (and most ancient), plenty of films have been made and set in Cairo. Aside from the film in the title of this post, a pseudo-documentary fiction about the city focused on a filmmaker (for Cairo is also a centre for Arabic language filmmaking), I’ve also included a short review of a short film directed by the great Egyptian filmmaker Youssef Chahine.

Somehow I’d got it into my head before going to see it that this was a documentary — a poetic documentary perhaps, a city symphony of sorts, but a documentary nonetheless. It’s not, but it does hover somewhere on a border that makes the fiction it tells somehow more imbued with melancholy and a sort of immediacy, even if it’s been over six years since the scenes were filmed. It also serves as an effective love letter to Cairo, a city in flux even as it was filmed, with buildings crumbling and disappearing. It uses the character of a filmmaker (Khalid Abdalla), making its fiction endlessly metatextual, as we see him manipulate the image, discuss the project with filmmaker friends, even commission the calligraphy which appears as this film’s title card in the end credits. There’s no grand plot besides his own work to finish the film, but there are threads of a life in turmoil: looking for a flat, nursing his mother, pining after his girlfriend, and fearing for friends in other war-torn Middle Eastern countries. It also doesn’t hurt that the Cairo the filmmaker captures is such a beautiful place, and plenty of the shots hardly need to do more than frame a sunset or a city skyline.