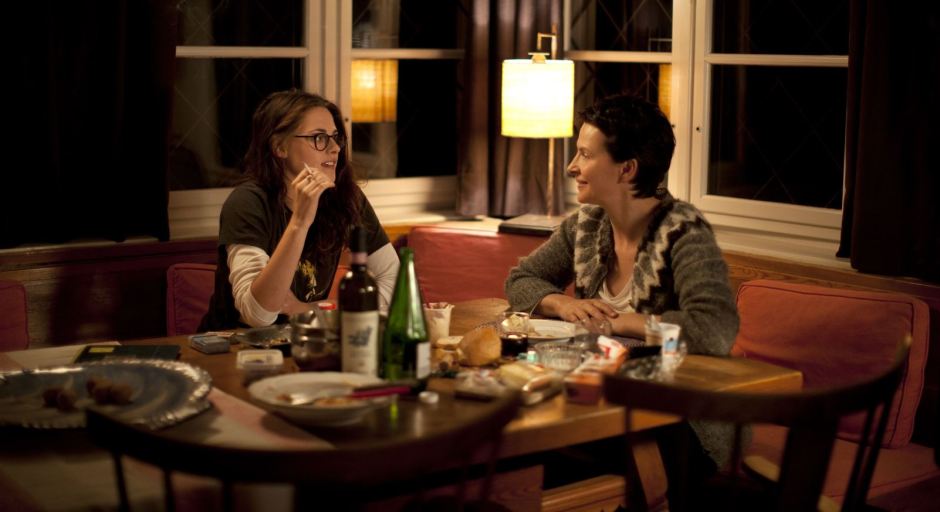 Aside from the pre-scheduled Criterion posts, there’s been slim pickings on this blog in recent weeks as I’ve been on holiday in the States and Canada, which means I’ve largely not been seeing films. However, I did catch up with one while over there. UPDATE: It has since been added to the Criterion Collection, so you see just how far I’ve strayed.

I’ve always had the sense from the infiltration of celebrity gossip into news coverage that Kristen Stewart has been underrated as an actor, apparently on the basis of, I don’t know, her lack of a sunny Californian disposition? It’s obviously a shallow criticism, as even if you’d only been aware of her since her turn in Twilight (2008), she’s already proved her acting mettle many times (my favourite being the 2010 musical biopic The Runaways). Clearly French director Olivier Assayas has been attentive, as he’s cast her alongside acting heavyweight Juliette Binoche, and Stewart very much holds her own (though perhaps it helps that Binoche is called upon to deliver much of her performance in English). It’s a classic self-reflexive European narrative about actors and acting, about ageing and egos and a sort of psychic transference between the older (Binoche) and younger generations (Stewart, as well as Chloë Grace Moretz in a small role). Stewart plays Valentine, the harried but largely unflappable PA to Binoche’s Maria, a well-known theatrical actor who is travelling to Zürich to deliver a tribute to the (now-deceased) director who discovered her when she was a teenager. There’s something about the way it all unfolds with its narrative ellipses, its teasing character linkages and its self-reflexivity about the craft of acting and cinema, not to mention the mountainous Swiss setting (the film’s title is taken from a notable cloud formation), which reminds me of the Swiss auteur Alain Tanner and a 1960s/70s tradition of this kind of story. Clouds of Sils Maria hints at the boundaries between the real and the fictive in a playful, literary and engaged way, but leaves us on a questioning note, unsure of exactly how much has changed for its title character and those women around her.

For a story about the sometimes angrily confrontational, sometimes wilfully naïve student activism of the 1970s, this is a remarkably warm embrace of a film. Possibly that’s because it feels like an autobiographical take on the era from director Olivier Assayas. I don’t know whether its story — of a young tousle-haired art student Gilles (played by newcomer Clément Métayer) trying to find his métier while watching his friends move off in various directions (geographical, emotional and spiritual) — is based in Assayas’ life, but it feels like something that is at least close to his heart after his previous multi-part epic Carlos (2010).

The title (at least in French, where it means “After May”) alludes to les événements of May 1968 which started with riots amongst university students on the edge of Paris and spread across the country to provoke further riots and strikes, convulsing all aspects of the French workforce, not least the arts and cinema. A new more politically-engaged consciousness was reflected in the 1970s films of, for example, Jean-Luc Godard and Chris Marker, and in the film criticism of such influential standard-bearers as Cahiers du cinéma (where Assayas started his career in the 1980s).

Après mai is set in 1971, amongst a group of students who are just finishing their final year of high school. There are plenty of teasing hints at the volatile new factions which opened up after May ’68, as we see the students at the start of the film engaged in street riots broken up by police violence, and at fractious meetings in which subsequent action is debated and competing leftist points of view are aired (though nobody seems to like the Communists). When the students, seeking an outlet after the brutality of the police, vandalise their school with graffiti and post breathlessly accusatory fliers, the school authorities are shown scratching their heads as to the meaning or relevance of it all. A subsequent ill-judged attack on a school security guard sees the group, now out of high school, disperse to various parts of Europe and further afield.

There’s humour too in all this revolutionary fervour. END_OF_DOCUMENT_TOKEN_TO_BE_REPLACED