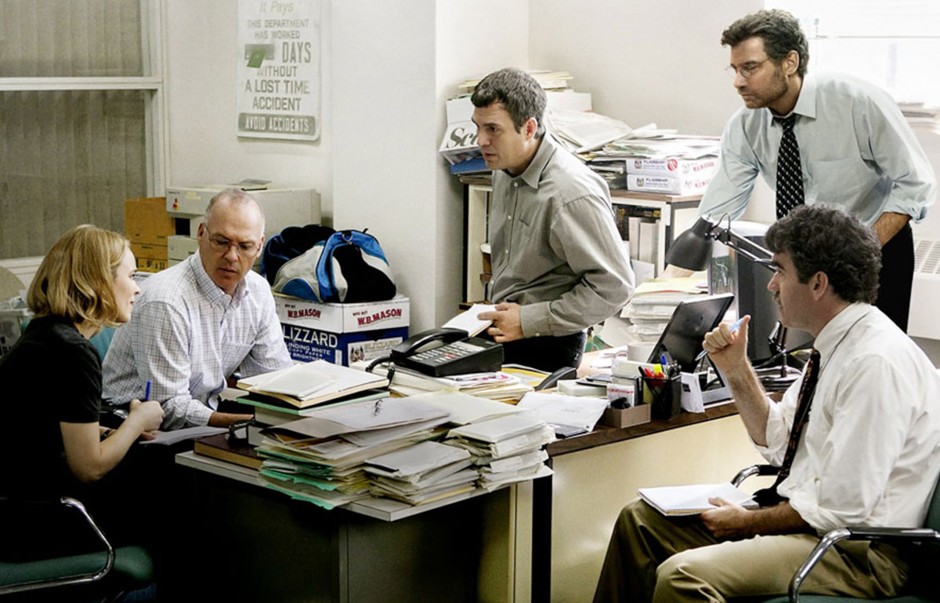 In my head I had this in much the same category as the recent The Big Short, in the sense of being a largely-beige awards-baiting torn-from-the-headlines dude-centric drama, and it is those things. But Spotlight‘s real interest is in people’s power (specifically via journalism) to make a positive change in a society overrun by corrupt institutions, where that other film is about men self-interestedly taking advantage of corrupt institutions. The institution in Spotlight is the Catholic Church, and the allegations of child sexual abuse against it — a big story at the time (and since then), and one that was particularly noticeable in a largely Catholic community like Boston. The corruption that allowed the abuse to be covered up was endemic within the city, reaching the courts, the police and, indeed, the Boston Globe newspaper itself, which only upon the arrival in 2001 of new editor Marty Baron (Liev Schreiber) started to take an interest in the case once again. It’s the investigative journalism of the Spotlight team (led by Michael Keaton’s Robbie) which is the film’s focus and it does a good job in getting across some of the painstaking research and journalistic legwork involved in putting together a story such as this, including the long period of months it takes. Along the way we get to see the backstage wrangling amongst the team (Mark Ruffalo’s reporter Mike is the one with the meatiest role), along with their dealings with lawyers (such as Stanley Tucci’s overworked attorney, rightly sceptical of the newspaper’s intentions) and with judges, while operating in secrecy to both hide the story from the church itself (which is seen pressuring those in power to shut it down) and from other papers. Naturally some of the timeline is rather telescoped (particularly the months after September 2011), but it’s a movie that avoids grandstanding speeches, preferring also to downplay any filmmaking tricksiness to put across a polished if visually unspectacular story of a group of people just trying to get something done. At that task, like the journalists it depicts, the film excels.

Surely everyone who likes this genre of film (the high school teen comedy) has seen Mean Girls by now, and either they’re unimpressed or they’re constantly quoting writer Tina Fey’s catchiest lines, possibly online with some kind of animated gif behind them. It’s in a clear line of descent from Clueless (1995) and a template for plenty of other increasingly anodyne takes on the same setting. I’ll admit to loving it the first time around, but I’ve seen it a few times since and I think some of the shine has worn off. Possibly this is down to a certain level of nastiness at the core of many of the characters, Lindsay Lohan’s protagonist Cady included, as she is increasingly co-opted into the vain status-obsessed circle of school royalty, the ‘Plastics’ (Rachel McAdams, Amanda Seyfried and Lacey Chabert). I mean, to be fair, that much is kinda cued up by the title, but it’s sometimes difficult to care about the fairly conventional sitcom-like narrative arc, as Cady goes from geeky outsider to cool leader-of-the-pack, then back to a point of (almost) harmonious resolution. Still, it does have plenty of great and quotable lines, I can’t deny that — it is the film’s greatest strength — and Tina Fey does double work as both the film’s writer and one of its (pretty large and impressive) supporting adult cast. Among the teens, Lizzy Caplan stands out as the alienated and sarcastic Janis, while I always enjoy the appearances of Kevin G and his Mathletes. So I certainly don’t want to write it off; it still has much to recommend it, even if it’s not the enduring class act of Clueless.

John le Carré’s work was most recently brought to the screen in Tinker, Tailor, Soldier, Spy (2011), a film set in a world of muted colours, grey men in grey suits, smoking in drab offices. The palette of this new adaptation of a different Le Carré work updates itself to a more recent era, but in many ways there’s still the same sense of back-office drudgery. Philip Seymour Hoffman, in one of his final roles, unkemptly shuffles around, trying his best to blend into his urban surroundings, and constantly puffs on a cigarette. For, after all, this is a European thriller, set in the immigrant city of Hamburg, and as a nod to this, all the actors speak in German accents. They all do fine with it, but it’s more distracting than it probably needs to be. It doesn’t help too that the first hour flits around amongst a widening array of minor characters (including a criminally underused Daniel Brühl). All of them feed into the main story, but it takes its time to come together. When it does, it’s all rather anticlimactic, but you get the feeling that this is exactly what the filmmakers wanted, and Hoffman is a great actor for finding the best from this kind of setup. Appropriately for Anton Corbijn, a director who graduated to film via photography, it’s handsomely shot by French DoP Benoît Delhomme, all sleek lines and beautifully crisp, in many ways quite at odds with the characters. It’s no masterpiece perhaps, but it’s put together with care and acted with great resourcefulness, about characters who take their time to watch and observe. In that respect, it passes the time well.

I think it’s fairly well understood that Malick’s films are an acquired taste, especially the more recent ones. After The Tree of Life (2011) — which on balance I was not a huge fan of — comes this new film, and both of them (more than previous Malick films) eschew traditional scenes of dialogue, often cutting away before someone speaks or cutting to them just after it seems as if they’ve spoken. On the rare occasions when characters are shown speaking, the sound is generally faded out before they finish, let alone any response is given. Swift editing imbricates flashes of future and past time, an impressionistic bricolage of images. Which all goes to make it a film of fleeting experiences, of connections made at a level other than speech. Of course, there’s still the poetic voiceover, this time primarily in French (also Spanish and Italian, and very little English), which perhaps makes the tone of it less intrusive to English-speaking audiences than it can seem in such films as The Thin Red Line (1999, my personal favourite of Malick’s films). But you wouldn’t expect a Malickian voiceover to explain anything: it remains at the level of laconic, gnomic utterances.

The film is focused on Olga Kurylenko, as a free-spirited French woman who falls in love with an American, moves to Oklahoma for a while, then moves home. That’s basically all that happens in the film, at a plot level. As a character, she’s thinly-drawn: she has no apparent job. The camera constantly follows her as she walks, sometimes runs, ahead, spreading out her arms, twirling, pulling her friends, her lovers, the camera, us, behind her. There are three other, essentially supporting, characters here. Ben Affleck is her love interest, playing some kind of environmental scientist, so his primary relationship is with nature, and there are fleeting scenes showing the damage being wreaked on it by people. The lovely Rachel McAdams plays a local woman who works on a farm (this bit is a bit less believable), so again she works with the land. Javier Bardem plays a priest, perhaps the character who is most often shown trying to communicate, which often takes him to more human scenes of dereliction and poverty.

But the film doesn’t really feel as if it’s about these characters as people, so much as what they represent. There’s the contrast between Europe (Mont Saint-Michel on the coast, the city of Paris) and the new world of Oklahoma. The faith that seems centred at Mont Saint-Michel is set adrift in the huge expanses of Oklahoma; it’s only in the enclosed spaces of the prison and the confessional booth that Bardem’s character connects with his calling. But then again the outdoors in this new world is always filmed imbued with a beautiful radiant golden light, where it’s glum and a bit oppressive in Europe.

If those are just some feelings I get from the film, thinking back upon it, then that’s because it’s a film primarily of feelings. It certainly won’t be for everyone, but it made me happy.