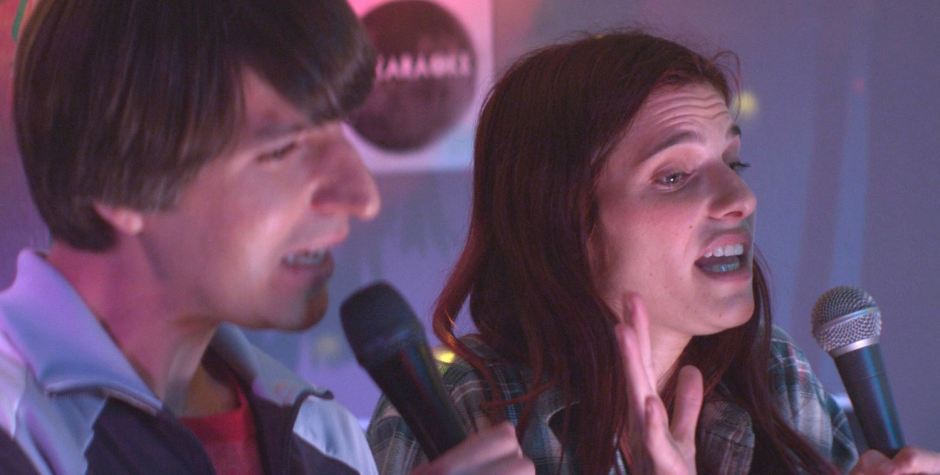 So I’m hardly likely to be the only person watching this film who was not previously familiar with the world of trailer voiceover artists. You know, the ones who canonically start their spiel with stuff along the lines of “In a world of sadness, their love was the only thing that held things together” or whatever — you know the drill, just think deep booming voice. What writer/director/star Lake Bell has done is take this world and question its cosy assumptions, most notably about gender (when was the last trailer you saw voiced by a woman). This is the real world of the film, and it provides the backbone for what is it turns out a rather wonderful, affectionate comedy.

The credits sequence, which mimics the blurry VHS aesthetic, does a quick overview of the voiceover world, moving swiftly from the very real, revered and late Don LaFontaine (the man who coined the title phrase) to his successors, the characters who provide the background to this film: Sam Soto (Fred Melamed) and the young upstart whom Sam is grooming as his heir, Gustav Warner. It’s a cosy old boys’ network where jobs are traded amongst a very small and very male coterie of voice talent. This is where Soto’s daughter Carol comes in (the director Lake Bell), who is working initially as a voice coach but who wants to do what her dad does. He doesn’t support her, doesn’t think she can succeed, and is anyway desperately vain, having just moved his much younger girlfriend in, displacing Carol, who goes to stay on her sister Dani’s couch.

In many ways it’s a family drama, not only because the central characters are all part of the same family, but because the voiceover world is such an insular one. Dani (Michaela Watkins) are her husband Moe (Rob Corddry) are having marital problems, while Carol likes shy studio engineer Louis (Demetri Martin), though allows herself to be seduced by the supremely confident Gustav. He is only interested in her as a conquest, and quickly becomes agitated when he learns she is a rival. It’s this angle that is the most interesting, for you get the sense that having a woman rival is incomprehensible to these men, who are so certain that it cannot happen in their profession. Thus does voiceover artist surprisingly become one of the last remaining battlegrounds for women’s equality.

None of this would matter much, though, if it weren’t for the likeable performances by all the principal characters, especially Lake Bell as the struggling voice coach who wants more than her profession allows (we see her helping Eva Longoria master a cockney accent at the start, and she has an obsession with recording exotic accents at her sister’s hotel to aid her work). In the recording studio, Martin has a floppy-haired neurotic charm, ably assisted by the deadpan Tig Notaro and the ever-watchable Nick Offerman (without his Ron Swanson moustache, but still as straight-talking as ever).

For all that it doesn’t pull punches about the inherent sexism in the industry — and there are some pretty upfront admissions of such — it doesn’t hurt that no one in the film is really nasty, though Gustav is certainly self-involved to a disturbing degree. As a father, Sam is basically decent, and writer/director Bell isn’t interested in punishing or hurting her characters, even the ones who act badly. Carol may sleep with Gustav, but it’s not presented as something that defines or degrades either of them, though it’s equally clear they shouldn’t be together. It’s a comic world, after all, where everything sort of works out in the end.

In a World… is more than just being about an unusual facet of the film industry, though that gives it some extra interest. No, what it does really well is that brand of likeable character-driven comedy which has a positive message without getting preachy, and in which its characters all find themselves without hurting each other. And for that, I really like it.