This is perhaps an outlier in my themed week of British costume dramas, but it’s a period piece and you couldn’t possibly say it doesn’t have costumes, so I’m including it. Obviously it’s a biopic of the life of Elton John, and it’s mounted with impressive brio (even if maybe it’s not entirely for me, I’m willing to believe it is better than the similar production the previous year about Queen, Bohemian Rhapsody, which director Fletcher took over late in proceedings).

I don’t think I’ve ever specifically chosen to listen to an Elton John album or song, but of course they’ve often been on in the background or on soundtracks and such, so a lot of them remain familiar to me. That said, the point I’m making is I’m not really in the demographic for whom this film strikes any particular chord, as I’ve never been a big fan, but I concede that Dexter Fletcher has a solid touch with a musical and this one is good fun to watch. The performances are all good, and it has some nice set-pieces, such as the one where Elton goes from almost dying to being pushed on stage, seemingly in a single sequence. The framing device — him unraveling at an addicts’ group therapy session — is rather too convenient as a way to pull the narrative through his whole life, and he does a lot of confronting his earlier self and family/friends in feverish flashbacks, but it’s a musical, so it rather trades in elevating the quotidian to a magical and surreal level, and at that it succeeds nicely. 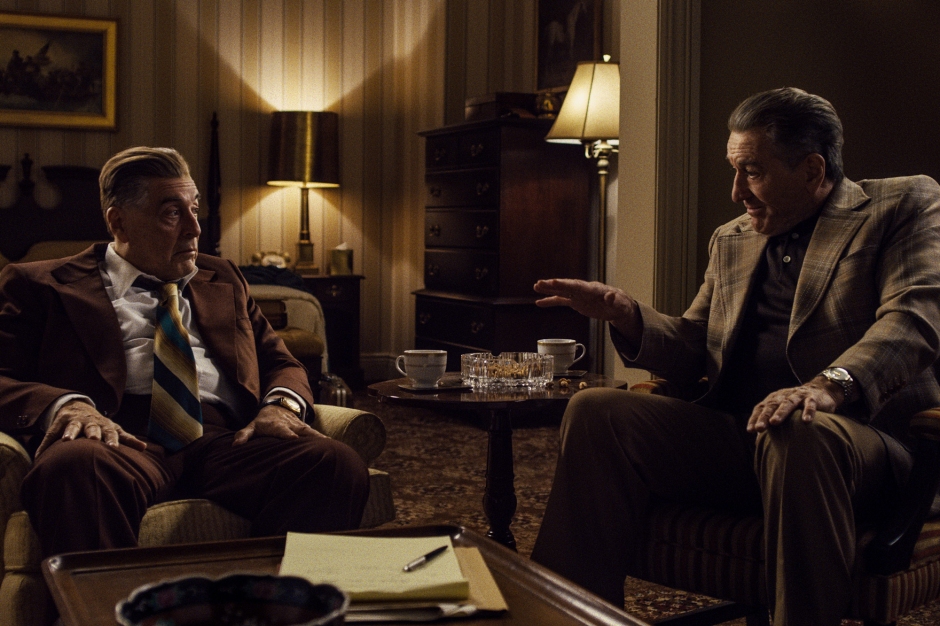 Today sees the UK release of Harriet, but only two weeks ago we got a brand new biopic from Martin Scorsese. For that I did a themed week around very long films, but this week’s theme means I can revisit that film and post a review. I liked it. I gather some didn’t or felt it somehow less consequential in Scorsese’s oeuvre, but a lot of people have been gunning for him for some throwaway but no less deeply felt comments about superhero movies. Still, there’s a place for everything in modern cinema, and even if three-and-a-half hour gangster epics are mostly being made for streaming services now, it was still a solid box office draw given the very large packed cinema I saw this one in on a Saturday afternoon.

Look, I mean yes Scorsese has some good films (even some great ones) in all genres, but the stuff he’s always been best at capturing is the world of gangsters — a shady world of men closed away behind dark glasses in subterranean lairs — but those worlds have changed as he’s got older. Now the gangsters are old too, they’re old men who have lost things in life, maybe lost everything, lost their friends, alienated their families and are just these old men, dying off and being forgotten. No matter how powerful you were, how much influence you had, eventually people forget your name, your legacy and everything that made you important when you were in your prime, and that’s eventually what it feels like he’s getting at by the end of this film. The de-aging technology has been much discussed, but even when these men are presumably playing 20 or 30-year-olds, back in the 1950s, they still look like old men, move in a hulking slow way — I don’t think that’s wrong for the characters, but in practice they always seem old no matter what the time period is. The timelines are all mixed up, though, as events from one era rush into those from another, because this is a story being told from the perspective of that old, forgotten gangster, as snippets of events seem to hit him and pull him along, and for all of its length, the film is never slow or boring, provided you like this slow-burning vibe that Scorsese is going for. Pacino does his usual big thing, though increasingly looking like Steve Van Zandt as he gets older in the film (and Little Steven is in the film too, in a small part, playing some old school crooner on stage I believe), but the rest of the cast are all about intensity, not least Joe Pesci, who feels like the real standout in this ensemble. It’s a good film, is what I’m saying.