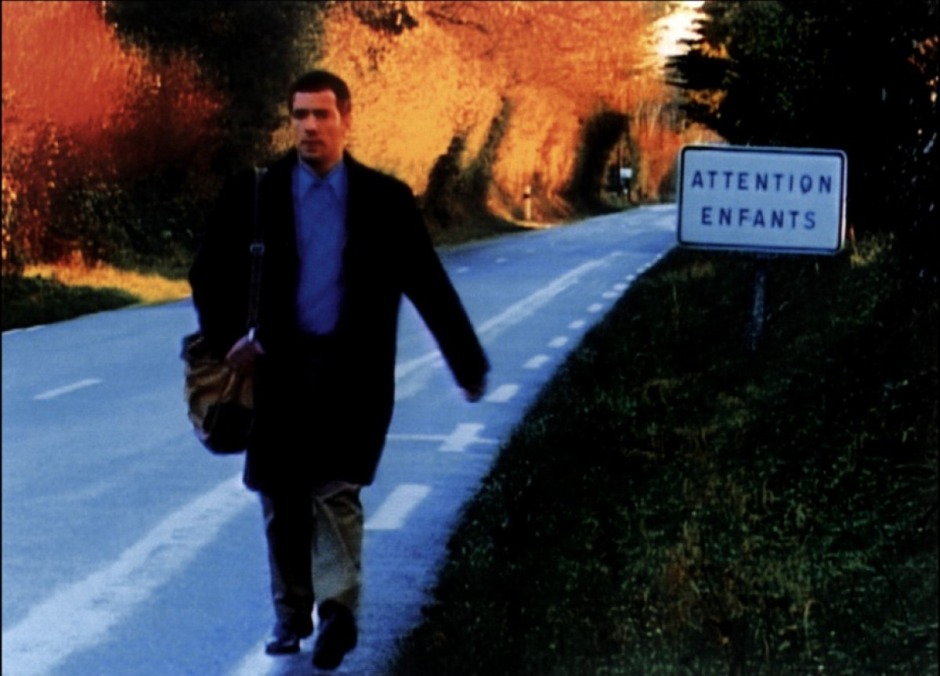 With a bit of a break for Hélas pour moi (1993) and For Ever Mozart (1996), for the majority of the 1990s, Godard was engaged on his densely-textured multi-part video work Histoire(s) du cinéma. Given his devotion to that project (which I shall be reviewing later), it’s no surprise to find in this return to the narrative feature format, something of both that and his celluloid roots, both in terms of the textures as well as some of the themes. Éloge de l’amour is every bit as interesting and complex a work as his other late-period films and probably demands (certainly deserves) more attention than I was able to give it on my one sole viewing (so far), but it feels to me like a great film.

Those allusive textures I mentioned are most obviously in the last half-hour, shot on video and pushed towards an extreme colour balance, all thickly saturated blocky colours threatening to overwhelm the fragile human figures. But the first half too reminds us of Godard’s past, utilising starkly monochrome photography of Paris by night. If the style is not quite the same as back in those 1960s films with Raoul Coutard behind the camera — here it’s more contrasty, with deep inky blacks pressing in everywhere — it still feels redolent of that era. Filming in the street recalls his debut feature, while a scene by the river brings to mind a similar one in Bande à part. It’s a modern Paris but the filming renders it once more timeless.

That said, Godard the filmmaker is concerned above all with time, and as in many of his films, channels whatever are his current autobiographical obsessions. With Éloge, it’s his advancing age that is part of the backdrop. In fact, in many ways this film is more elegy than eulogy, its blend of textures and repeated classical music motifs drawing us back in time, with reminiscences of the French wartime resistance becoming part of the story (one commodified by Hollywood filmmaking — the ‘resistance’ here is as much Godard’s towards those methods of telling a story, as it is the wartime French). Love, which from the film’s title is ostensibly more important, is just one aspect of history and one that can so easily disappear into the shadows. Intertitles which flash up during the first part of the film are unclear as to what’s being eulogised: “DE L’AMOUR” or “DE QUELQUE CHOSE” (“of something” else). By the final video-shot part of the film, the intertitles are more interested in the passage of time — this section is set two years in the past, the “ARCHIVES”, “a long time ago”… “so long ago” — and the fact that the past utilises grainy colour video footage is even more a provocation.

The story itself is as opaque as ever in late-period Godard. There’s some sense that a writer (played by Bruno Putzulu) is trying to recall a love he shared, and is auditioning women to play parts in his story, but it’s all very obliquely presented. The ravishing black-and-white images show face-and-shoulders shots of the women speaking to camera with the writer’s voiceover questioning them, the writer in various settings of wealth and aspiration talking about the project, and night-time Paris with its tourist monuments in the background and its night-time workforce of cleaners and caretakers passing through. All these shots come in a flow of associative ideas, broken up by black leader suggesting images snatched from memory or from time itself.

I suspect audiences either go with Godard’s dense filmic poetry or actively resist his generalising and pretensions. He doesn’t make it particularly easy — for the American audiences, there are some challenging positions with regards to US hegemony and Hollywoodisation of history, which certainly come through as sore points when flicking through the critical commentary online — but his way with sound and images remains undimmed after all these years. He’s certainly grown crankier as a filmmaker, but the end result is a beautiful film that I believe stands up to repeat viewings and gives something of a sense of how it is to grow old within a medium that fetishises beauty and youth. It is something of a swansong.

Next Up: The most recent film of Godard’s I’ll be looking at is Notre musique (2004), which deals with violence and colonialism.